To opine upon the opinions of others 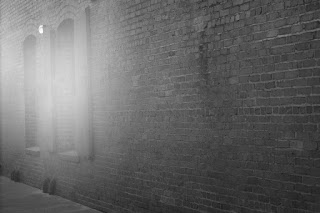 I was experimenting, all in-camera, to see how closely I could get a snapshot to look like 35mm b/w film. I walked around the town square yesterday, just before dinner. The unedited picture above works, I think, though not for the reasons that I had quite hoped for, or was "shooting" for. It is that I wasn't holding the camera quite level and intentionally did not "correct" the composition of the shot. The sunlight that is starting to wash out the left side of the image almost looks more like light leakage onto film. Though, perhaps a man should not give away all of his secrets.... After all, it is half of their charm: mystery.

If photography is half-of-a-truth then I am satisfied with the contribution of my little lies to the other half.

I've been asking people to shave my back, just as friends, but so far there are no takers. I've promised not to make eye contact while it's happening. This lone stipulation has not been adequate to find the right person for the job. I've also offered sustained eye-to-eye contact through the use of a mirror for the entire procedure.

If only the boy was a little bit older and could handle a straight edge… I know that he would do it for me, though it does run the risk of traumatizing him. I can see him in some future therapist's chair, describing the horrific details of shaving Dad's back during the summer.

If I could speak to his future therapist I would explain the situation perhaps much better in advance than it can be done after the fact. It would be an awkward conversation, of course, illuminated by the expansive terrain of my back hair, lit only by an open bathroom bulb with me trying to impress upon this youngling that one day they will become a therapist and my son will seek their professional advice, in doing so it will come to light that my son used to shave my back hairs, and that's why they're looking there now. It is vital to the therapeutic effort that the therapist understand the depth of the trauma.

The patient works their way out of a forest one memory at a time.

I'm not quite sure how to get this future therapist to understand the importance of all the details, nor if my methods are entirely feasible. Therapists are just critics that have learned to hold their tongues. It's a way of saying, You're not okay and you probably never will be, but try this experiment anyway.

Nobody likes critics, but even fewer will admit to loving everything just as it is.