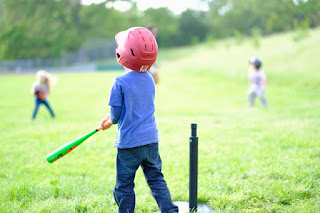 The boy is a natural. I took him to practice the other day and he hit the ball well, even chased after it, and was the first to get to it in the field, just past the pitcher's mound. With a tremendous amount of enthusiasm, yelling, and focused gesticulation from a few of the coaches he was finally able to make it to first base, then eventually around the bases to home.

If I could just get him to understand how gambling works then he might have a real shot. I'm gonna check with Mom and see if she's okay with him getting on the juice - possibly apple, maybe orange.

As he and I drive around the valley he keeps asking me how we get to the underworld, and where exactly is it. At first I laughed his questions off, but he persisted, so I had to explain that the underworld is a mystery and that Hades is quite a fearsome fellow, to say nothing of Orcus. I babbled something to this poor kid about Orpheus, a lyre, and a tree.

He was not impressed with Greek or Roman mythology. He said that they go to the underworld all the time in Legoland. I wanted to tell him that the underworld is where souls go after they die, but did not want to unnecessarily fill the boy's head with such an image, such useful nightmare nonsense.

So, after he goes to sleep tonight I will stay up late and do some investigation into this new chapter in the pantheon of the otherworld.

Legoland sounds frightful, but they still might hold the vanishing ghost of Eurydice...