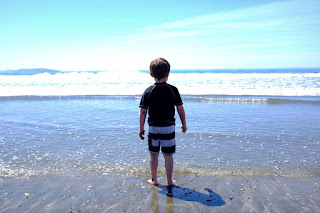 Dinner last night was good. The spiced meatballs were unsurprisingly better than the chick pea salad, which was a little bit dry. Nobody seemed to mind much and we ate in peace. If I were to make it all again I would use more olive oil on the chick peas. I've decided that cooking with others is almost as much fun as cooking by myself. Monday nights are taking on a very different dimension. I used to arrive at my friends' house and proceed to drink a bottle of wine or more while they cooked, I talked, then we eventually ate. Now, we discuss recipes and home improvement. I was relaying a story about having found something I liked at Williams-Sonoma when I realized that my foot had crept out of the closet. I had taken a picture of the almost prepared meal, but it was before I added the wedges of tomato and avocado, so it is not enough to look at and wonder in delight concerning my culinary or presentation skills. A handful of people that I know from the clubbing scene have become chefs along the way and many of them are being helpful with recommendations and recipes. I have tried to keep it simple, but the temptation to use more spices and take on more challenging dishes is in line with so much of the rest of my personality, one that seems nearly incapable of doing anything to what can be considered a reasonable extent. I hung a spice rack recently, then filled it with spices that I thought I might need, not really knowing what those might be. Nature abhors a vacuum.