The Bottom Line: Why Dogs Fuck 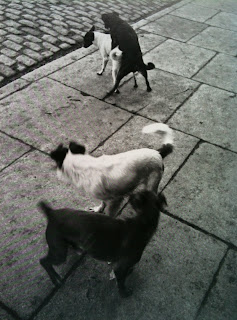 I've never had sex with a 40 year old woman. I have with a 39 year old, however. So, I can nearly imagine it, but one can never be quite sure with these things. I suppose that I could try with a 41 year old woman and then with some basic addition and division... through the assumptive property that all averages share the same qualities… = Voila!

I can nearly surmise the experience, though that might be mean of me, arithmetically, and perhaps my test subjects might constitute an atypical subset of society. It is difficult to know with such things. From my perspective those people seemed reasonably normal, comparatively speaking.

Now, I'm no scientist. I don't even like science. Some days I hate it. I don't care for the way that the word is spelled or pronounced, but we must still give it its credence. Science tells us with the singular voice of unanimity that all male mammals will fight for the attention of the most middle-aged female in the group. Because mammals may be many things, but obsession with averages and the coveted bottom line will always consume them when in a group setting.

In the picture above I am unable to determine the age, sex, or gender association of the receiving canine, so this image does not serve our purposes very well here, but it is still fascinating to look at. The term "alpha male" has its origins in these same mathematical practices. It marks the birth of the alpha-numeric system, you see.

The measures of central tendency run particularly strong among those mammals closest to man, or woman. Mankind is what I mean, etc. Or, do we say humankind now? Orangutans, for example, are simply wild about modes. These hairy beast spend their days averaging out columns of figures. They are the only other animal that knows and respects the differences between an average, a median, and a la mode. Even those sneaky dolphin are useless in the face of this basic statistical model.

Well, I'm just thinking out loud here. At almost 50 years of age it is what I do most. That, and sometimes farting out loud without any control or awareness of my own behavior.

For those of you who might cry Sexist! to these open musings: I've never had sex with a 40 year old man either, though I presume the same reasoning holds. While writing this I was role-playing as a cross Sagi-Taurus, so just blame the planets, fucko. Now you've really done the math!