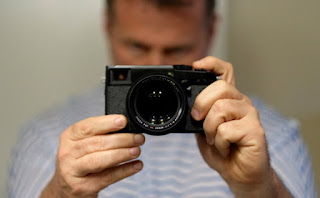 The camera is fucked. It's going back, one way or another. I may have them send me a new one. I may just return it. It's more money than I should be spending. But, I am in love with the contraption. We were going to run away together, it and I. Just the camera, a rickshaw, and me. Us, etc.

If I return it, then perhaps I can afford some local running away time.

I have the boy this weekend, so we will have some adventure, either way, then running back again. There will be giggling.

I taught him how to use a baseball glove last night, sort of. He starts T-ball in a week or so. I had been asked to coach. I should follow up on that.

We tossed the ball back and forth in the courtyard. He still struggles a little bit tracking a ball in flight, but he's getting there.

I never felt very close to my father. It was not entirely his fault. My mother successfully undermined whatever feelings I might have had for him. I suppose she felt justified in doing so, but it was wrong. I can see that now. He was not such a bad guy, not nearly what she made him out to be. To emotionally manipulate those that you have that power over is wrong. I can see that now.

My father rarely ever practiced baseball with me. The few times that he did try were memorable because they were so awkward. I remember my mother deriding him because he wasn't very good, though not to his face. She claimed to have been a baseball player when she was young, though I have even fewer memories of her and I playing. None, in fact. She spoke often of her years as a promising young athlete, before she had to give it all up to care for her father in his final years. Once, my brother and I found a newspaper clipping of my father when he was in school. He had been an athlete of some kind before joining the navy.

That's what a parent can do to a child, if they wish, or if they are incapable of stopping themselves.  Most of all if they don't know what they themselves are capable of. The first step towards becoming dangerous is to feel justified. Self-proclaimed victims never have need to evaluate themselves. Any horror committed on another is pre-approved by an inverted sense of morality. All of life becomes a struggle to claim victimhood first. It was feminism without courage. She confused meanness for strength, though she was capable of both.

Perhaps oddly, my mother was the person who most emphasized the need to forgive others. It appears there may have been more than one attribute of her character in which she simply could not stop herself. She was also more loving than her counterpart. My father was absent, to me, until much later in life.

Well, they are both gone now. There is that, the endless nothing that yawns and burps at the abyss, that still gurgling and fecund pit of the past.

All things should be returnable to amazon.