The hall of mirrors 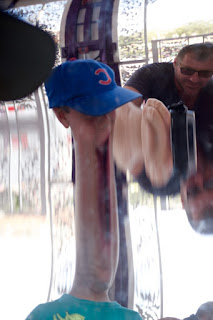 I awoke to the memory of this song, which somehow gave way to the second half of this. I had promised that if I ever woke to thoughts of Jackson Browne songs then it would be time to finally do myself in, but now I don't feel like it. I guess it's not really a Jackson Browne song, so there is that. I think The Four Seasons did it. Saved by doo-wop facts.

There are a handful of Jackson Browne songs that can be listened to, but no more. I'm told that he's a great songwriter, but his songs can't hold my attention to the verse that's supposed to matter so much. Like Elvis Costello, there's a lyrical twist somewhere in the final verse where he flips the metaphor or something, but I've given up caring by the time it arrives with its inexplicable verbal twist. Snottiness alone can't sustain my interest. Great songs are supposed to make you want to listen more, not less. I think Elvis Costello only writes songs so that he can get the last word in a private conversation with himself.

That's what I would do, anyway.