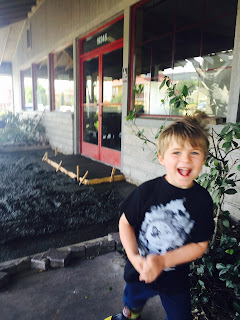 Everything that can go wrong will. I went from feeling great to banging on death's doorbell in two days. Rachel and the boy came home early from a cabin trip. She had warned me that they were sick, but without saying it I believed she needed some help as she had driven home early. So, I went over and spent some time with the boy. Three year old's have a way of needing love over sickness.

The choice was simple: clean it up while sick or let the sun bake it in.

I came home still not quite accepting what was happening.

That's where I stayed. Now, I'm a believer.