She, My Selfy, and I 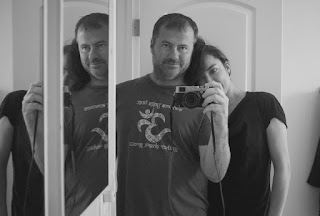 She is back in New York. I put her on a plane late last night after an afternoon of champagne and a late lunch of white fish and various veggies. She was being a very cute girlfriend and spent the day in the kitchen making stuff for us to eat, claiming that the only reason was because she didn't want to see the veggies go bad. I know better, of course. The way to a man's heart… Etc.

It's love, we have both conceded, whispered admissions of romantic defeat and all of that. I suggested keeping the relationship "open" for a few years, to make sure that neither of us felt physically constrained by the other at all, especially considering the great distance between us, though she seemed to wish for something more monogamous in our arrangement. Women are funny like that.

I'm okay with being monogamous. It's easy enough. I'm so pleased to be sexually active again I would agree to just about anything. You should see the contraption she made me wear around the house.

I'm only kidding, of course, we've had no such conversations. The visit was a pleasant success. Getting to know somebody in person is a different thing altogether than forming an intimate correspondence with them. In many ways it is greatly preferable. One can always choose when and how to respond to an email or a text. Life is not so simple when lived authentically, though a person's physical responses to silliness are very telling about who they are. Laughter and frustration can not be easily hidden when standing or reclining face to face. It is this lack of concealment that brings forth much of the magic, rising to the surface like so many champagne bubbles.

Concealment of self is why so many people choose Facebook over life. Some wish mainly to contrive a version of themselves. I should know, I have seen the crawling spiders of persona.

I would go into detail about the past four days but she is a much more private person than am I. I do not believe she had quite expected the sensation of seeing her picture here on this site, with me writing about our experiences together and people responding to her visit here. It did not bother her, she claimed, she was just perhaps not quite prepared for it. Most people exist comfortably between privacy and exposure, with parts of themselves leaning towards each, and an internal sense of control governing the space between. To have someone openly present part of your life to their world is an unexpected sensation. There is perhaps an exhilarating sense of sudden nudity to it, though whose is always a question.

That linked song in the last paragraph has nothing at all to do with she and I. It was only the phrase that reminded me of the song on one of my all time favorite albums.

I have set my Tinder account to "Do Not Disturb"...