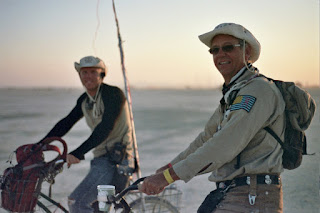 Three posts in one day. That must be a close tie for a personal record. I already miss my special female friend. I have too much time on my hands now and she really brightens the place up, etc.

I rode my bike up to Gundlach Bundschu, a favorite old cycling route. I did not come close to matching my personal best in time, though it was nice to once again reaffirm the relationship between my head, legs, and heart. The latter of which nearly burst on the last 200 yards up the hill to the winery. Luckily, they had a pleasant fellow handing out water. Little could he possibly know that he likely extended my life from that moment onwards. I gasped at him as a form of thanks. He seemed to understand, acknowledging my appreciation with furrow-browed looks of concern.

Things are ramping up for Burning Man. The preparations are many and most of them seem to fall on my shoulders but that is the spirit of the thing, or what it becomes the more times you go. Having friends is a form of reliance, one that is deeply involved with self.

I should buy a box of Emerson's essay "Self-Reliance" and pass them out freely at BM, or in trade. It need not be any more radical than that, once its implications are grasped and fully understood.

I don't normally talk with legal authorities of any kind when given the choice, as all of you know, but last year two pseudo-rangers stopped to talk to me, seeing me using one of my film cameras in the early morning sunrise. One of them was derisive concerning all of Burning Man's basic tenets, so I opted to discuss the principles in a broader context, a thing he did not quite seem prepared for, and then used those external concepts to arrive back at Thoreau's "Civil Disobedience" where the conversation became markedly more pointed, with my summation including a statement reiterating the citizen's responsibility to not allow authority to atrophy the conscience of the people through threat, intimidation, or any type of derision, focusing on the need to push back against misuse and abuse of said presumed authority wherever it is found to be less than serving its society.

I then noted that the authorities were quite lucky that it was happening in such a peaceful way here in the desert, and that everyone should be grateful, and not to forget to count their blessings. That unsurprisingly ended the interchange, though not unpleasantly so. It was just a good conclusion point.

I have some pictures of them around here somewhere.

Well, the boy is stirring, and the great game of baseball awaits. 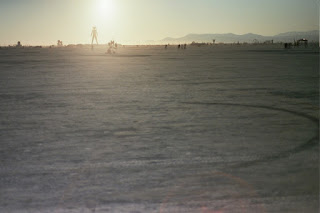