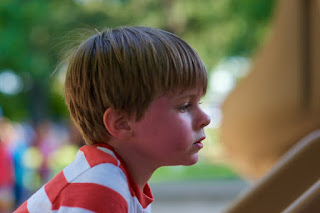 I nearly cried out for Christos today. It was that bad. At one point I thought that I was having a heart attack. Everything was going wrong, and escalating quickly. I was fluctuating back and forth between clammy sweats and shivering chills. Then, I realized that it was just the pain killers wearing off. I would list all of the things that have gone tremendously wrong with me but some children read here, or they might one day.

Everything is centralized in the lower abdomen but that doesn't mean that it has remained there. My innards went apartment shopping on Hwy 12 this morning. Few things are worse than cleaning vomit from inside the car, deposited down into the secret spot where the window lives. Twice today I lowered it and raised it to find liquid parts of my health remaining there.

It creates within one a deep appreciation for a fully functioning immune system. Every second of life becomes more precious. The others that became sick (the ex- and the boy) have already recovered, but I am fighting no less than four maladies simultaneously. My lower abdomen looks like a precision shark attack. Gatorade alone is not going to fix it.

I expect a night of restless sleep, if at all. I will report on my progress here tomorrow morning.

A tender nurse is arriving from a great distance to usher me back to health. She promises to deliver much healing power directly to my chakras. I await her arrival as a wounded soldier awaits the morphine drip. Though she is still far away and the maladies moving in.

If you don't hear from me at sunrise then send the dogs out to sniff the perimeter.