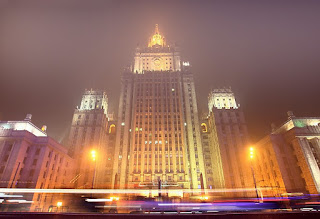 My new bride arrives tomorrow. All the way from the outskirts of Reutov, not far from Moscow, just outside what used to be referred to as the outer Stalin defense ring. The paperwork to get her here was substantial, but she is coming from one of the more reputable services who handle much of it. I have an Arab friend that swears by them, and has bought four wives of his own already. He claims he wouldn't shop anywhere else online, though he does wear white socks with dark suits, so who knows. I haven't heard her voice yet, but I'm told she speaks adequate English, knows all the phrases that will make the relationship work. Enough to get it started, anyway. Doesn't need an automatic dishwasher was among the sales bullet points, though not first on the list, that was Happy she make you Happy. An odd omission of syntax. Perhaps an incomplete translation.

I once stood on a hill on the outskirts, where one could see almost the entirety of Moscow, several of the Vysotki (Seven Sisters) peppered across the landscape. None of them quite the same yet all of them of a shared architectural purpose, to suggest unity through similarity in shape. It is a thing that springs from the hopeful mind with an insistent force, more assertive than persuasive. Stalin was a real waking dreamer.

I stood there on this hill for a few minutes, nearly bored. It had taken almost an hour to drive to the spot. Its selling point was as I have already described, you can detect the circle of Moscow from atop the parkway. There were others there, also standing and looking, bottles of vodka in one hand, the other raised with fingers pointing to different distances.

On the drive back towards the hotel - not far from Red Square, though I was encouraged not to try to safely walk it - my attention was directed to "the only building that survived the fires started by Napoleon." A fact that I knew to be quite untrue, knowing that Napoleon did nothing to burn Moscow to the ground and was simply incapable of stopping it, not having the manpower. The fires were partially an act of Russian sabotage, wanting to reduce the victory to meaninglessness by a willful act of self-destruction. The Russian troops ignited their own city as they retreated, as well as some residents fleeing so quickly that oil lamps were irresponsibly left burning in homes, the belief being that the Russian soldiers would all die before letting French troops take the mother city.

Men of that age did not conquer cities to destroy them but to possess them, to preserve them for a different use by a slightly different people. All of that has changed, of course, and one need only vaguely remember what became of Baghdad upon America's arrival there to stiffen this point. The cradle of a civilization, set aflame in some spots so that it could be looted in others. Napoleon was ruthless and shrewd, but his purposes in conquering were not as destructive as what mechanized war allows and encourages. This result occupied far less of the warring mind then, being an unpleasant product rather than the primary intention. There was still plenty of rape to go around then, though. The troops must have some amusement in triumph. What is the point in defeating a people otherwise if you can not shame and violate their women. Nothing produces semen as do tears in wartime.

There is a sculpture on the drive in from the Moscow airport that marks the point where the German troops almost made it into the city, getting what was left of their asses handed to them all the way back to Berlin. Nobody treated the Germans more poorly in defeat than did the Russians, nor did any other nation have the same motivation. There is much speculation as to what happened to the German prisoners of war and captives, but nobody would envy what remained of their lives as they marched from Berlin back towards Russia. About a million were killed, another two million worked under very harsh conditions rebuilding Russia under Stalin, most of them being returned to Germany after about five to ten years of very hard labor. Men are not as much fun to rape, I guess, though certainly there must have been an occasional bit of horseplay when no one was looking. Or, when they were.

My new bride and I won't be discussing this much. Russians have their own version of history, which has a very strained and tenuous relationship with the facts, being infused more with national pride than with actual historical consensus. There is - and I do not exaggerate here - not a single point of twentieth century history that it is possible to agree on with a Russian. They will look you right in the eyes and tell you that Russia was the first to land on the moon, and on this point they are actually quite correct. When you clarify and say "manned space mission" they will wave their hand in dismissal, having already won the argument.

They invented the computer, cell phones, the entire science of rocketry, all of it. New York was probably their idea also. Just ask, you'll see. People never believe me when I tell them this, but New York is an older city than St. Petersburg by almost a hundred years.

The French word "bistro" is actually Russian, oddly. It entered the language during Tsar Alexander's coalition occupation of Paris, the first foreign occupation of the city in over 400 years. It took two years to kick Napoleon and his troops all the way back to Paris but many felt that it was well worth it, with him going into exile in Elba as a result after the loss at Leipzig, abdicating rule back to the Bourbons.

I've given over power to bourbon and vodka any number of times since, cleansing the memory in the fluids of forgetfulness, then expelling it in the blood red rivers of Waterloo.

The meanest women in the world are Russian. The ad claimed that these women have been trained by some of the best, though they did not say the best at what. One can only hope that it is not history.