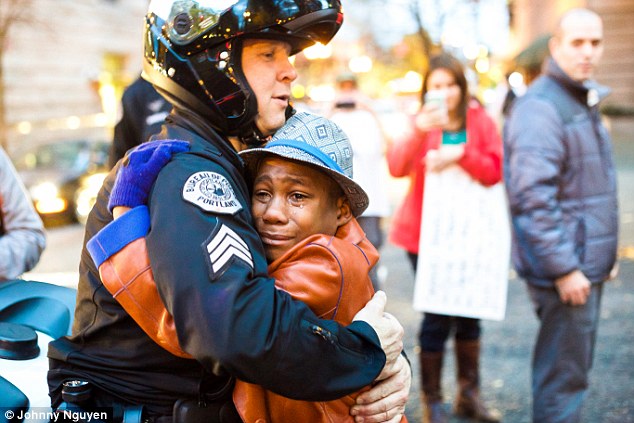 
(This is a work of incomplete satirical fiction and is not intended in any way to be legal advice; whether substantive, useful, or purely imaginary. I am not a barrister, etc. If you feel that you are being unfairly targeted... then please contact your local police office and let them know who you believe might be your persecutor or persecutors.)

I don't like cops very much, either, and don't ever want them hugging me.

They are necessary in the same way that death is: they provide order, too often at the point of severe pain. In this, they are the presumed resolution of "sickness," and will remind you when given the chance, the literate ones. If it were not for death then there would only be perpetual disease.

Do you even have any idea of what sickos I deal with every night?


A few rules, for power:

- Never, ever grant power to the humorless.

- Never assume the basic goodness of humanity, particularly in those who have sought out and gained petty or substantial powers over others.

- Do not ever let the punitive force of society exceed the creative force.

In the handful of experiences that I have had with cops... I have found often, only after that fact, that they used their knowledge of how to abuse the law to direct the outcome of our interaction in such a way that they were able to flex the maximum amount of power against me, with no accountability whatsoever. Even when I was "trying to help."

Cops don't like me, generally, and I usually echo and reflect those same sentiments back to them. They don't respect me, and I make sure that they know that I feel similarly. I very rarely begin an interaction with a cop with anything less than respect. The undoing seems to be in the questions that I am willing to ask them.

Anybody that is very well liked by cops is quite plausibly a complete perversion of independent thought. If your heroes are cops then you just might have the imagination of a killer. Cops do not kill more people than the general population, but the comparative numbers should surprise anybody.

I should qualify... when discussing sports and weather, in line at Starbucks, cops adore me, wish me to be one of them, etc. It's only when they have arrived to create order that things go terribly wrong with them.

If "line of duty" is a valid defense, without need of further question, then why is black on black crime even questioned or referenced. If Giuliani can claim we need so many cops because there is so much black-on-black crime then why can't we extend that thought process out to its logical conclusion and reward blacks for killing other blacks? It would be much cheaper than cop pensions, and achieve seemingly similar goals. If the magnitude of the lie is to be believed at all then we have some horrible inner city comptrollers.

The only thing that I have truly learned in these experiences with cops is one very simple fact: ALWAYS exercise your right to remain silent. If a cop is asking you questions then he is looking for ways to implicate you ,or to use your own statements against you, or somebody you might care about. Try to record your interactions with cops, always. The laws on this vary from state to state.

- All cops are liars.

- If there were more "good cops" then there would be far fewer bad cops.

- Do not ever open your door for a cop (This includes your car door, and even the majority of the window of your car door. Just crack it so that you can talk. Don't be a prick on this one, but do not give them the chance to unlock your door for you. They will. Tell them that you are scared and do not wish to open your window any further. This is a solid, legally defensible position that will get your ass kicked almost every time. It's worth it.).

- Keep your door locked and speak with them through a respectable space, one in which they can not enter unimpeded. You can tell them to walk over to a front window of your home and speak to them through the glass. If they break this glass without a warrant then it is a very different thing from them claiming (as this highly awarded team of two) that you opened the door for them, no matter what the facts.

- All cops are liars. They are all also writers, of a sort. Their writings are taken with disproportionate seriousness.

- Do not ever offer a cop information concerning yourself. If you are being questioned about a crime then seek legal counsel, even if you believe yourself to be entirely innocent, but most certainly if you know yourself to be endangered. Your right to remain silent will prevent them from arresting you 90% of the time, or this statistic is what I will test the very next time I have a chance.

- Don't be black, brown, or anything other than white, ever. I can not emphasize this enough. If you do not have "white rights" then you should hide inside, always. You are always a threat to a cop's safety, never forget that.

- The number of judges that question a cop's claim of uncertainty for their own safety against a dark-skinned person is virtually non-existent. Do not be black.

- Do not ever publicly question a cop's authority, just silently show them yours: NEVER OPEN YOUR DOOR. EXERCISE YOUR RIGHT TO REMAIN SILENT. You can legally stand at your front window and taunt cops with silence. You have no legal obligation to even acknowledge them. They will shoot you to prove that you were not a ghost.

- This act will be acceptable by any court of law. Ghost are very scary and real, they just proved that.

- Every now and then you will meet a nice cop, one who even seems "good." On a bad day, or even on a very good day, this same cop will cover-up for a cop that has hurt or bludgeoned you, or immorally used the law against you, or even egregiously broken the law themselves while you were trying to help.

- Frank Serpico may have been a good cop.

- Notice the position of most Libertarians on the increasingly fragile concepts of Liberty and Freedom from Tyranny.

- Too often, they will side with the cops. These are dangerous people.

A few tips for driving:

- Turn your cell phone off before getting in your car. This has a two-fold benefit.

- Buy a dash-cam that streams to the cloud.

- Never admit to wrongdoing, wrongfully thinking that you and the cop just became friends.

- All cops are liars.

A few tips for home:

- Install a webcam that streams to the cloud.

- If a cop pushes his way through your front door without presenting a warrant or announcing that he has one then shoot him dead once he has entered your home. Make sure that they fall inside your home.

- Once a felony has been committed then they all become accomplices to that felony. An illegal entrance to your home is safeguarded against retribution and you will be rewarded for heroism once the justice system and media comes to understand your unique plight and story.

- Judges simply love this, because they love the law.

- Shoot them dead until they are no more, the illegals on your lawn.

- This may take several minutes. There will be more arriving promptly.

- Verify that they had no warrant by calling your lawyer.

- Do not fret over the cost of this call.

- Use a land line, if possible.

- Relax, and enjoy the earned satisfaction of temporaria iustitiam.

- Enjoy it, your time may be coming to a sudden close, unless you happen to be white.