What's that dollar doing in my underwear? 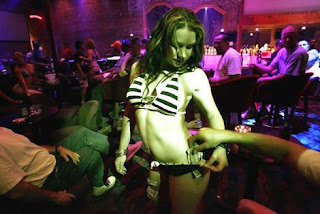 I made it to Los Angeles, have been trying to sleep for the last 8 hours. It is all useless. I have sleeping problems and being anywhere other than home does not help the issue.We stayed up late last night, drinking wine. My friend and I arguing until we both gave up, as is our custom. His wife watching in mild bemusement. Then I tossed and turned for a couple hours, falling out of bed once, trying the couch instead of the spare bedroom, then back to the spare bedroom with all three dogs following me excitedly. Finally, I just gave up. Here I sit.

Those two can sleep at their own leisure, anywhere and anytime. I will probably not see them until noon, or later. I am writing this post into a stickie note because I neglected to get the wi-fi password from them. Consciousness is miserable. I want sleep and there is little chance that I'm going to get any. This is among the most boring paragraphs I've ever seen in my life.

Last night it seemed that there was nearly endless food to be eaten, steaks and vegetables and wine. This morning, as is often the case at other people's houses, there is no easy food to be had. I have already eaten an entire bag of sandwich meat (ham) and a few bites of ice cream (chocolate). When my friends wake up I'll force them to go and get a real breakfast, bacon and sausage to round out my ham ingestion. I guess that I accidentally put the ice cream back in the refrigerator rather than the freezer. I just went to have another bite and found it in the wrong place, slowly melting.

I've gotten so fat that I can't breathe well any more.

I smoked pot last night, a thing that I don't often do. I don't remember enjoying it, we had drank too much wine. Nothing as mild as pot was going to break through the fortification that red wine had built around my mind, a moat with a rusty drawbridge, my cerebrum proudly perched just off center, tilting in the winds.

That reminds me. Last night on the plane I did end up sitting next to a blonde, though she was closer to 34 than 24. She was also coming to LA for the weekend. She had also considered driving instead of flying, she also had a cocktail on the plane. We sat and chatted about the differences between LA and SF, thinking ourselves clever. She asked what I was going to do when my friend picked me up from the airport and I joked, "Steaks and a titty-bar, what else is there?" She took this opportunity to tell me how disgusting titty-bars were and how awful desperate men appeared to her, and on and on. She wrapped up her little speech with, "But, boys will be boys..."

"I'd say that there's as much 'girls will be girls' going on there as the other."

She did not seem to like this and it occurred to me that we were still trapped on a plane together for a few more minutes, so I let it drop. The implication that money grubbing women revealed any truth about women, or people in general, was an unpleasantness that she did not seem particularly interested in entertaining.

But it never ceases to amaze me how thoughtlessly some people will make the most dull and sexist remarks and the worst thing that you can possibly do is agree with them, but just invert the stereotype. Nobody likes it, and it never seems to have the desired result.

Oh well. There was a decidedly "How dare you!" look that came over her face.

I'm not opposed to titty-bars, but I'm neither a big fan of them. There is something to be said for a room full of naked women. I just said it: a room full of naked women, or nearly naked anyway. It is hard to argue with, unless you take it upon yourself to argue for others, then there is much to say, I guess. Women never seem to like it when they are discussing the exploitation of women and I point out that the men are also being exploited, and possibly even more so. They fail to see how. Even when you point out the obvious to them, that they are giving more value than they are receiving and that they are duped into this by various genetic impulses that they have no control over, whereas the women engage in this behavior decidedly for monetary gain.

If you believe that the pleasure gained is worth the money lost then titty-bars are your kind of place. Alternately, if you believe it's worth getting naked for a few dollars at time, and you're physically predisposed to engage in this type of transaction, then being a stripper just might be the right thing for you.

When I was younger I knew quite a few strippers. They all seemed to love electronic dance music and ecstasy, which coincided with my interests. Many of them would openly express their reasoning for being strippers. There was a sort of, "I might as well do it while I'm young and I can, before everything falls apart"