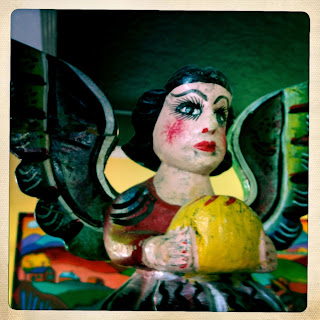 The romantic new year. A day in which everything tastes like chocolate, and I the emperor of ice cream.

I am having a New York Strip steak for breakfast, with eggs, over easy. That is my simple way of honoring the day. It is, as they so often say, the least that I can do.

If I had a nice bottle of cabernet then I would also drink that, just to show that I was not merely doing the least that I could, but going the extra distance to really celebrate.

I almost finished the sentence above with the word drone. It's funny to think of how the word drone has changed meanings. Though the drone bee does not do any work, it is a common misconception. The drone bee fertilizes the queen and nothing else; they are fed by the bee masses, saving their strength for the queen. There is no such thing as a "worker drone" among bees.

But, I still like my job, very much. A good friend told me that I was fooling myself and I would quickly hate it, but he was wrong (so far). His name is Pat, just so that he doesn't confuse those last sentences as being for anybody else.

Rhys is walking now. Have I mentioned that here already? He no longer even needs help from a chair or couch to get himself upright. He walks around in the mornings with a waffle that Rachel has made him, inspecting all that there is to reach. Dusting the house with his newly toasted waffle.

I can hear them upstairs now, playing in Rhys' room. The sun has yet to breach the shallow mountain line. There is a coming milky blue.

I am cooking the steak on the grille, in the waning darkness.