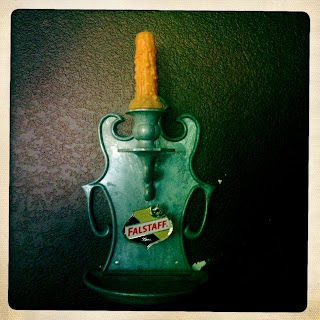 I am writing my first ever post from my phone. My suspicion is that the justification on the image will be all fucked up. We'll see. It is all that I can do today. We are in Monterey and there is no wi-fi.

We just went and had breakfast at Denny's, a thing we haven't done in years. It occurred to me that they should partner with the Quest Diagnostics clinic system. They share the same hours and clientele, 24/7 and the elderly. One practically begs for the other.

I had the Santa Fe skillet, in honor of having just been there. It was sautéed in a generous puddle of grease. Once the world-famous handful of Denny's cheese-product melted, and with some added Cholula sauce, it tasted pretty good, but it caused me to have a few flashes of pain down my left arm. I re-named the plate, "The forti-aorta!" (New on the Denny's menu! Recommended by our in-house doctors! Now with our exclusively patented heart-strengthening oils...)

It's before 6am still. We were up at 4. Rachel's trying to put Rhys back to sleep. He's fighting it, as usual. Traveling with a child is particularly difficult. He doesn't seem to understand the changes, though he loved the ocean. He kept running right for the waves. It was really something.

Twice now that we've taken Barkley to the the beach has he turned his back on the water and paid the price. A wave overtook him right as he sat down. The wave drawing him back out towards the ocean as it receded. For an instant I had to ask myself which mattered more, the dog or my camera. We kept calling him to come to us but the water moving back to the ocean seemed to be scaring him and he kept backing up into the water. Luckily, the wave withdrew enough and Barkley made a wet and muddy run for safety, newly invigorated by his fearful experiences.

More later, Rhys is sleeping again. This is the only time that I ever get to kiss Rachel. Perhaps the Santa Fe skillet is an aphrodisiac. That could be yet another advertising angle for my new enterprise.

If a heart-attack lasts more than 4 hours, please contact a nurse.