The beaches along the coast 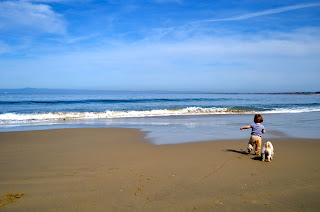 Traveling with a child is not simple, or easy. Add a dog to this formula and everything becomes a series of cascading considerations, limitations, and needs. It's not that the trip was not fun but when we came home I was not relaxed, but only felt that something had been accomplished. We had done a thing that we had not done before. Effort was expended and it was now complete. We had driven down the coast, seen some things, then driven back.

Now, I return to work.

Do not get me wrong. The beaches were fun. Watching Rhys discover them with the liberty of locomotion was charming, impossible not to enjoy. He was giggling much of the time. This was his second time at the beach, the first in which he could walk, which is quickly becoming a run. He is a natural for the ocean.  He darts towards the excitement of the approaching water as soon as you set him down, with Barkley galloping in tow.

Barkley loves the beach with a comical naiveté. I think I mentioned that yesterday. 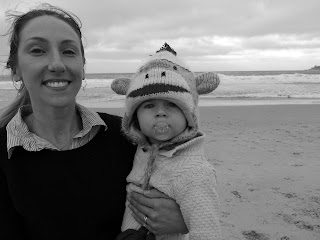 But traveling requires much preparation. Everything becomes a process about getting and being there. Packing and unpacking things from the car, often with the thing you need the most packed underneath the things you need the least. There is the eternal question, "Is this place dog friendly?" Some yes, some seem that way at first, some a much more decidedly no.

Will he be warm enough? Will Barkley be too hot in the car? Don't forget to crack the windows. What do you want to do? Should we go this way? I have to use the bathroom. Are you hungry? When will he need to nap? How long can we park here? Do we have any change?

Sometimes all of society seems structured just to punish you for being there. Petty restrictions on parking that are nearly impossible not to violate. 1 hour parking in front of an area where there are restaurants; restaurants that have predictably slow service. Why? Only so that they can prey on you. They want you to visit, then punish you for having done so.

The California Highway Patrol has initiated a program to start fining seagulls that fly too close to the beach. Rules are rules, they must comply.

We tried to avoid the tourist areas, but it is not always easy, especially with a child. It is one of the many reasons I hate any place that invites people to be there. Tourists should be punished this way, through unexpected taxes and fines, but I'm one of the other guys. I don't even want to be there. I should be the recipient of parking violation funds, not the victim.

We went to Cannery Row. I can only imagine the pride that Steinbeck would feel at how the light he shined on that place transformed it from being a place of much difficulty during the great depression to a place of much commercial victory in our current economy. He seemed interested mainly in reducing suffering, injustice. It was one of the most authentic outdoor malls I had ever been to... People come from all over to buy useless things that they will go home and work to pay for. All the people seemed so happy. Everyone had two coffees; one for each credit card.

As for nature, we did get to see some through the windshield. 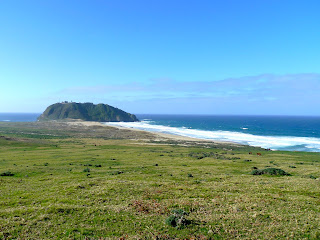