Many battles with the savages 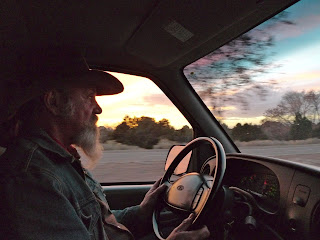 I made it to Santa Fe, the famed birthplace of Santa Fe Claus. I flew into Albuquerque - taking the requisite left turn as warned against by Bugs Bunny - then took a beautiful drive through the desert valley into Santa Fe just as the sun was setting. I took some pictures with my little travel camera, but they can not convey the full richness of it, of course. Why do I do such things, you ask? Because I'm a fool and I like staring at the sun, but without all the danger and blindness.

The guy who drove me from Albq. to S.Fe was filled with information and great stories. He and I will be buddies by the time it's all over. In the late 60's he used to live in the Lower East Side, directly across from where the Hell's Angels NYC chapter is on 3rd St. He fell in love with a Puerto Rican girl and followed her out here. She lives in Abilene now.

We drove down the Pecos trail and then the more famous Santa Fe Trail. I only regret that I did not bring more furs and tobacco to trade.

Today I will go to the museums. There is an historical museum here that I want to see. As I was walking to breakfast this morning I happened upon a monument in the center of the square. It once read: TO THE HEROES WHO HAVE FALLEN IN THE VARIOUS BATTLES WITH SAVAGE INDIANS IN THE TERRITORY OF NEW MEXICO. The word "savage" has been etched out so that it is just a rough rectangle. It appears to have been done by hand. I was told yesterday that the chiefs of several of the area tribes were hanged in the square. The Indians lined up along the roads giving the Spanish settlers a chance to leave peacefully. The Indians killed about 400 settlers, the rest fled. They eventually came back and were substantially more persuasive the second time.

I had coffee at breakfast but I fear I will need another. The world is moving too slowly. I am tempted to crawl back into bed for the day.

Here is an abbreviated version of what I saw yesterday on the drive through the valley: 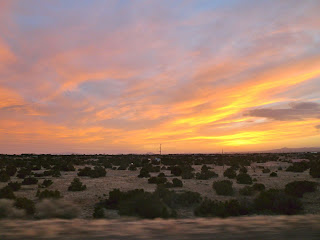