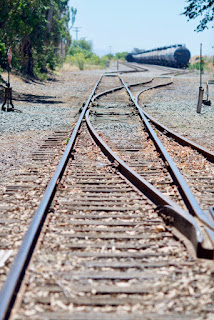 The above was the only picture that I took yesterday. I packed up all of my gear and tried to find a drivable route to Wingo, CA but had no luck. Wingo is a ghost town. It is decaying out in the sun in the marshlands north of of San Pablo Bay. These train tracks pass somewhere near it, I think, but the walk was a few miles. I had no water with me, and had not brought the backpack that I could put the camera case in. All I had was some pot and opium and I did not wish to become confused or sleepy in the midday sun. I had already eaten a xanax and had a nice, fine pint of strong beer before departing the house. Driving the countryside here should be a relaxing experience.

If you look for it on a map it seems as if there is a road that leads to it, but that is not the case at all. The road has been closed for so long that it has overgrown, barely being a gravel path now, blocked by a locked gate on private property - Larson Winery. There are abandoned train tracks that can get you there also, though they can be confusing once you are out in the marsh, where they split and criss-cross many times. I have been told that a mountain bike or a motorcycle is probably the best way to get out there.

I have been warned that uninvited visitors will still get shot at from broken out windows if you try to visit and get too curious. Apparently, somehow, there is still some private property out there and there's no way to tell what is private and what is not. The remaining habitants believe it all to be private. They hate photographers most of all. They will give you a few warning shots before they make sure you can hear the bullets hitting the ground nearer and nearer to you. The idea of the warning must be palpable, and must increase in severity.

Wingo is where the North Pacific Railroad line used to split. There used to be as many as a hundred people that lived there. Nobody is really sure. Some of the buildings have burned down, some were taken to the bay by the river. One of the bridges collapsed long ago.

On the train you could head up to Calistoga on the Napa side. There was another line that went further up into Sonoma, though it was not a passenger line, it was only used for non-human commerce. You would get off in Wingo and take a horse-drawn carriage up into Sonoma - luxurious wine country, the closest thing that America had to the wine regions of France and Italy.

Nobody I spoke with is quite sure how long it has been abandoned but most guessed around 75 years or more. Nobody's parents or grandparents had ever known it while it was inhabited, but they all agree: do not go out there. You know what that sort of advice does to me. It's like showing me pictures of naked women - my interests surge. I've been looking online for motorcycles today. Yes, of course, I already own a nice mountain bike, but where's the sense of adventure in that?

Searching for an easy way there, and failing, did not seem to help my depression any. I went to the pub and had a few beers with a beef brisket sandwich. Those helped, or so it seemed. Perhaps they will help again today.

Here are some pics I stole from the internet: 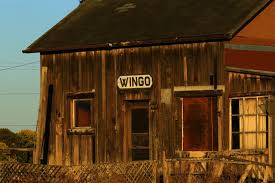 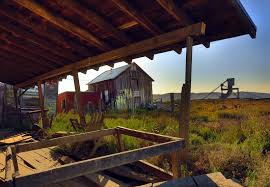 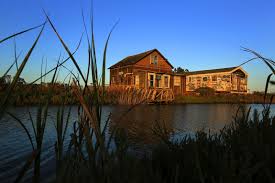