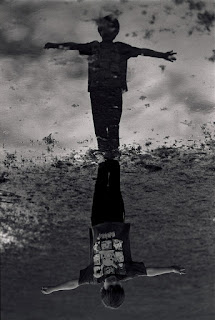 I have used this picture here before, I believe. I posted a crop of it to Instagram, where I am famous for being loved and adored. Below is the cropped version, which only a certain type of person seems to enjoy. It is more "Catholic."

If you can see and suffer the overt references to dear ol' Saint Peter, the well hunged.

Compositionally, it is known as an asymmetrical vertical echo. Well, I just made that phrase up, but it is what that type of image is known as now. Now that I have named it. It is neither radial, nor mirrored, nor balanced. It is unsettling to the eye. It suggests death, sacrifice, persona, crucifixion, drowning, youth, and flight, all at once. That is what it suggests to me. I bear no witness to the eyes of others.

Troubling, I know. But if those things don't interest you - death, sacrifice, persona, crucifixion, drowning, youth, and even flight-  then how did you arrive at this paragraph, written from so far away in the darkness?

I like the picture. One day, maybe, my son will appreciate it the way that I do. Perhaps he will have some girlfriend and take her on hikes and take her picture and find some beautiful, dark, unintentional meaning in the captured light he finds there, and shares with her, leaning in to sense her being in that great yawning, voracious darkness.

My mind is giving up. I'm not certain whether I want to do any of the things that have sustained me in the past. I want escape more than ever before. The old silk routes no longer transport this caravan where they once did. My troops are too tired to circle. I have written everyone I know; help can not come.

It is not very Catholic to admit such things. It is a sin to think, or to wish, that there is some unknown loophole in the vast celestial debt of life and living that so often dreams of the numinous. Death is the beginning of eternity, for each to beach. Today is the first day of the rest of your secrets. Divinity seems neither achieved nor disappeared, less given as stolen from the sands, this life of wind, glimpsing this vision, simple as it so often is, this riven puddle, imaged here within. 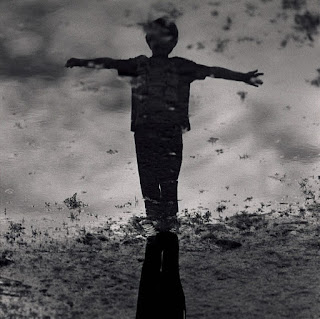