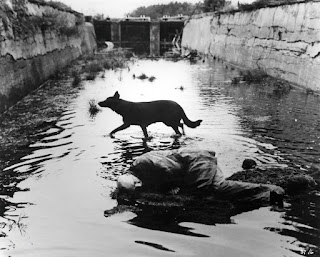 It's as if I can't escape this film. Last night I watched the first part of it, again, even though I had watched it a few weeks ago. Then tonight, I watched the rest. I wanted to remind myself of the hypnotic rhythm of it before moving on, much as the stalker approaches the Zone in a cautious and oblique manner.

I'm not entirely sure I understand why this film is so great. It simply produces a great contemplative state within the viewer. If you are of a certain psychological bent, like me. It is philosophical, but I am able to look past that and not get too wrapped up in its musings and diversions of dialogue. It is poetic, and even pretentiously so at times, but I also forgive it that. It is incredibly slow, yet I was unable to leave the room without stopping it, and even rewinding a minute or so when I returned, to return to its rhythm. Some frames are so delicate and disturbing and beautiful I would wish them to be framed and hung on the walls, though there is something about the motion of his images, however slow, that induces the trance. Few films possess me in this way. It is very dark, but only from the necessity of the story that it tells.

Yet, it is a science fiction film, a genre that I am known for dismissing, and openly laughing at my friends for loving as much as they do. Grown men. Perhaps that is part of its perverse joy for me. It is science fiction in a similar way that Nicolas Roeg's The Man Who Fell To Earth is, also: it almost isn't. Part of the pleasure of watching it is deciphering if the characters believe their own part in the story. If they are who they believe themselves to be. If they can be believed. In Stalker, we find that none of us are who we claim to be. Or, I think that is what is revealed. None of us know what we most desire. We can only fear that knowledge. We are perhaps right for having that feeling. Who would wish to know with certainty that their innermost desires are petty and cheap, or cruel, or worse?

I wrote to Cato last night, telling him of my excitement at watching it all over again:

I watched the first half of Stalker again tonight. It's incredible how much he can make you enjoy watching nothing happen on the screen. The sort of enforced meditative nature of some of his scenes would be so off-putting (most of the time) when attempted by other filmmakers, but he makes entire films out of those moments. It's insane, truly, the depth and confidence of his genius. I could watch absolutely nothing happen in a Tarkovsky film for days.

Well, that's what I told him. He loved the film also, watched it as part of his Covid Film Festival in Poland, with his girlfriend. He has been asking me about films that I believe are great. Well, he asked for a few recommendations. I am always afraid to offer them. Because some films that I would recommend, perhaps many, are not watched only for pleasure. They must be studied somewhat for their pleasure to rise from the grave of the mind. Never watch films with someone who has a degree in film. They are all affected bores, especially those with only a B.A.

I downloaded Robert Bresson's Au hasard Balthazar tonight, will try to watch it tomorrow night. I am going to become so ostentatious that I will disappear up my own asshole with some fanfare and a tiny squeaking noise, like pulling your fingers against an inflated balloon and then suddenly stopping. Do not worry if this happens. Do not worry at all. I will return in a shocking wave of happy flatulence.