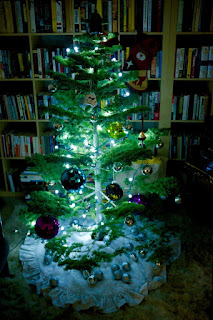 The temptation to write about my lack of sleep is great, but, you know... too much of a good thing, and all of that. I don't wish to spoil my readers, make gluttons of them with my suffering, etc.

Last night the boy and I went to Target and bought some basic Christmas stuff. I spent a few hundred dollars. We came home and it all just disappeared onto the tree. It seems impossible. It's a Christmas miracle.

If you are wondering, then yes, that is Darth Vader at the top where the star from Bethlehem might otherwise be. We're also celebrating Luke Skywalker's birthday this month, coincidentally on the 25th. 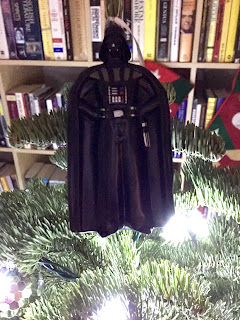 We're still working out all of the details. Not sure if Lord Vader will make it all the way until Christmas morning. The type tree I bought didn't allow for the multi-colored illuminated plastic star that I also bought. I had wrongfully assumed that you just spend money on Christmas and it all somehow works out. No, things don't fit everywhere that they're supposed to, and having this dying tree in my living room only amplifies that simple fact to me.

The tree does have a disco ball theme, lots of mirrored spheres. I think I'm going to call it the Life Star and start praying to it, or one of its balls, where kids come from.

This was the version of St. Nick that the boy picked out: 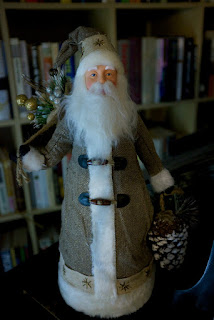 I was amazed that he didn't go for one of the brighter, gaudy, red and green ones. He picked a sort of Obi Wan Gandalf. Perhaps he is beginning to adopt my aesthetic sensibilities. The boy dresses much like me, mismatched socks and clashing colors.

Whatever. It all seemed to make the boy happy, and we must always remember 9/11 and that Children Are Our Future….

I love that phrase, it's so absurd and impossibly untrue in every single way that it can be looked at, or thought of. It is almost stupid enough to be an Elton John song.

There simply are not enough good Elton John interviews out there, particularly ones in which he discusses the terrible triple tragedy of losing Whitney, Amy, and Michael. It's a weeping shame.

I know that I'm going to hear some grief for this post. It is a well known fact that Tumbleweed Connection is one of my favorite albums from that era, and that singing "Don't Go Breaking My Heart" in the car with my mom is among my favorite childhood memories, but no self-respecting music lover could withstand the lyrics (and then the re-written lyrics) of "Candle in the Wind" with a straight face. There must be a word that means: even beyond the reach of maudlin. One gets the feeling that Elton John has always ever wept at the thought of things.


But that's what this season is for, making memories.

I'm sitting here in the very early dawn, drinking a glass of red wine, waiting for what? Waiting for this day to creep underneath this evening. Waiting for the weekend. Waiting for Elton John's eternal message to be heard and finally understood: that love is better than hate, and feelings can be described and monetized simply by describing them.

Jesus, his lyrics are fucking abysmal. That he had a co-writer who is now a multi-millionaire speaks to the true evil of our times. We worry about terrorism but then we let lines like, "Goodbye England's Rose..." slip by without a single hand grenade going off.

Because, when we allow this sort of thing... then the lyricists have finally won.

There's a joke and I know it very well
It's one of those that I told you long ago
Take my word I'm a madman, don't you know?