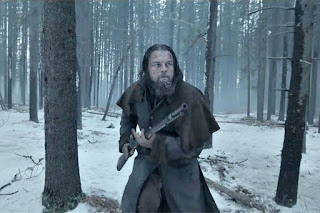 All night I had brooding, unsettled dreams, matched with restless sleep. I blame the movie we watched: Iñárritu's The Revenant. Don't ask how. There are ways. You don't want to know about them. We tried to watch Tarantino's The Hateful Eight, though the methods I mentioned did not satisfy all of our cinematic lusts for theft.

The film was disturbing; beautiful to look at, hideous to witness. The narrative was structured in such a way that the viewer had little choice except to wish to share in a revenge killing, a plot point which drives the entire movie. It had few laughs. The baddy did kill the son of Leonardo DiCaprio's character, an act that we also shared in, along with a bear rape scene that is unrivaled in cinema, to my knowledge. So, it all seems justified when the moment of determination arrives. Still, two hours and forty minutes of seeking pleasure in imaginary revenge exacts its spiritual taxes.

Also, what may have contributed to the dreams: we had a semi-spicy dinner at Lotus of Siam, a Thai place that was featured on Anthony Bourdain's show. This may have contributed, along with the winter solstice, coupled with the woman who pulled up onto the sidewalk and ran over almost 40 people on the Vegas Strip last night. There was a three year old in the backseat of the car. Perhaps the driver was motivated by some vague or acute sense of revenge, also.

The media were quick to point out that the authorities did not believe this to be an act of terrorism. The pedestrians may have simply been overreacting. Who knows, the woman might have been blonde and without affiliations to a local church, perhaps not even interested in reading religious doctrine of any sort. Perhaps she made fewer roadside comments than Mel Gibson. Without some dogma in place, the label of terrorism doesn't quite stick. What is needed is the adhesive of a spiritual idea.

The authorities said there may have been a little bit of panic reaction or a touch of fear response, there were a few participants that may have even reacted in a fight or flight manner, but the authorities were eager to offer that it did not seem as if the woman was using this act as a tactic to sell advertising to sponsors in any long term or overarching way. This was just a lucky one-off. She has no brand, no convenient ism to attach to the act, or to the phrase which might be used to describe her inspiration. It was just one lone looney. Well, other than the baby in the back seat, she acted alone.

They're testing the baby now for fundamentals.

The world can be a horrible place, sometimes it is too easy to forget. That people may want to escape it is not the surprise, that there are so many who are against the escaping is the real shock.

The only effective mechanisms portrayed in the film last night were guns. Beyond that, a world nearly bereft of industry was depicted, populated mainly by fur traders and Pawnee Indians. Killers, all of them, each with their reasons; some thoughtless, others nearly too thoughtful.

What did Hobbes remind us about a world without industry:

… no account of time; no arts; no letters; no society; and which is worst of all, continual fear, and danger of violent death: and the life of man, solitary, poor, nasty, brutish and short.