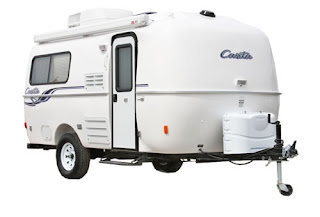 Well, I wrote part of this yesterday, but then became busy with actually taking care of the thing that I was describing:

Today, I begin my amorphous preparations for Burning Man 2016, sort of. I am finally taking the little Casita RV that I borrowed from a friend in to a shop for its needed repair. I cracked a brake light and some fiberglass as we were careening into my parking lot in blind reverse. Some true American hero had their enormous pickup truck extended about a foot and half out past where it should have been along the covered parking strip. The result of the collision was a broken taillight and a small crack in the fiberglass.

It has already cost me a hundred bucks. I'm sure that it will cost me much more before the time that the RV repair place is done with me. Car repair places are like prison cell mates for a week or two, ones that you don't have to spend all that much time with, lots of free time lingering in "the yard"... though you also can never be quite sure when the penetration will arrive, like a thief in the sunlight. You know, with certainty, that the moment will arrive. It will appear official, an invoice that is filled out with all of the details; alpha-numeric stick figures that, when examined closely, illustrate the bottom line of prison love.

Ah well, Burning Man has a way of costing much more than you had thought and hoped and prayed and begged and pleaded for... eventually conceding that it might, that it must, that it definitely will. Next year, if I go at all, I'll be tent camping. I prefer it to having an RV as they end up being a pain in the ass. Though they are occasionally very nice to have, like during a sandstorm, or if the mood strikes you to be inside of one rather than in direct sunlight.


Well, that is what I wrote yesterday.

Here is this morning's:


The actual experience was much better and much worse, in different ways. When I opened the box with the newly purchased taillights there was only one. I had initially called the Casita corporation and they told me that they no longer make the model that I needed. So, I would need to buy two of the newer kind, LEDs.

Then, about a week later I got an email from their parts/support guy, Victor, saying he had the older model and to just send back the two newer ones and he could sell me the older one plus $25 for shipping and handling. With shipping costs and everything else I just gave up and decided that my friends would get the newer LED brake lights as a gift from me.

Then I opened the box, yesterday. They had only shipped me one light.

I called them and raised my voice a little bit, describing both the situation and my frustrations concerning it. This did no good. I would get a call back, they said. No call has yet happened.


But, beyond all that, hooking the RV up to the truck and driving it over to the repair shop in Petaluma reminded me pleasantly of the Burning Man experience. I thought of the many hours that we waited on the highway to gain entrance, together under the moon and desert stars. I thought fondly of our camp, and the unexpected beauty of the ephemeral.  The lesson of how such feelings last in memory. Objects, all dispersed, yet subjects and memories somehow still pirouetting together.


Pulling the trailer was a much simpler affair when it was not loaded with all the shenanigans of the festival; people, food, clothes, and supplies of all kinds. It barely seemed that it was back there when its only extra weight was a floor full of playa dust. I put off vacuuming for reasons that still escape me. I suppose I surmised that a repair was needed and all cleaning could be finalized in concert with that event. Little did I know that it would take me months to accomplish such a simple thing.

Or, something that seemed so simple.


On the drive back to Sonoma I fell asleep at the wheel for just a second or two. I awoke with the truck drifting across the center line into oncoming traffic, of which there was plenty, it being around 5pm.

I have had sleeping problems again, spending entire nights up and alone. Sleep strikes suddenly, when it does. It is a relief that I do not drive for a living, for all involved.

It's a genuine eye-opener to experience something like that, coming back to consciousness after only a second or two and realizing what the result might have been had the bumps in the road not alerted my drifting mind to the impending danger.


Last night I slept many dark hours. I've been told that you can not actually "catch up" on sleep, though I don't believe it, at all. I went to sleep around 6pm and didn't wake up except to use the bathroom until 7am this morning. I captured the sleep in one night that I would normally only be able to take captive in two, even under the best hunting conditions.

It makes so very little sense, that the mind and body can be adversaries one night, then accomplices the next.