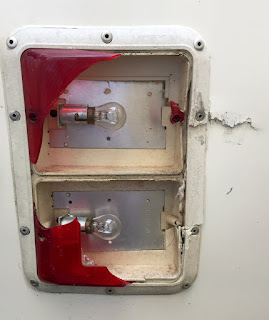 Unsurprisingly, the RV repair shop sent me an estimate for repairs: $1200.

Yes, that is the figure they quoted me. There is no decimal point there. That thing at the end is a period. Those are all round, full dollars. Twelve hundred of them. Keep in mind that I already provided the parts, which cost me about $100. This was just for labor... for replacing two brake lights and fixing a 3 inch fiberglass crack, on a 2003 RV.

The crack that you see above.

I called the guy, Mike. He tried to explain to me that he "puts his name on his work!" and I told him that I didn't want his name on anything, that I only wanted him to perform a very basic fiberglass repair, and that the RV did not need to be sea-worthy.

I talked him down to $347, which was still way too high, and then explained the meaning of this time-tested maxim to him: You can not polish a turd.

We seemed to come to some agreement and the work will be getting done at some point. I could have done it myself, and probably should have done it myself, but C'est La Vie, as they used to say. I don't want to apply fiberglass epoxy, nor do I want to sand it down once or twice after I've finished that. I don't want any part of this incident any longer, though it has become my albatross.

Mike went on and on about matching colors and the difficulty of his job, and that the crack was on a curve (I encourage you to look at it). I carefully responded with my reasoning: that this was not a '73 Corvette, it was a fecal monstrosity on wobbling wheels, nothing more. I explained my shame at even driving in for the repair in daylight, and that I'm on Tinder, and what if a potential mate witnessed me dragging that dung capsule across the county line?

The guy from the Casita corporation called me back and he told me that they have nothing but problems, particularly with repair shops in California. He's from Texas, you see. He seemed distressed that one of their RVs was even out here in California, away from home, and more so that it was damaged and in desperate need of help.

So, Burning Man just keeps costing. Even as nice as my new tent was before I brought it, if it was a total wash it still would have cost me a fraction of what this other business has, and the struggle is not over. Ah well, what is adventure but a story about where you spent your money. Mostly.

Adventures are about making money: somehow using your intellect to exploit the efforts and labor of others. A misadventure is when you use your intellect to lose your own money. I'm pretty certain that is the golden standard for what differentiates the two.

Something happened. I don't recall what any more. I only know that an invoice is likely on its way.