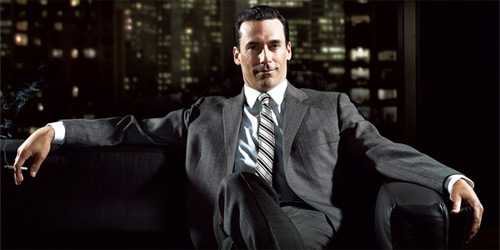 Apparently, I couldn't stop myself... I awoke around 1:45 am and didn't immediately go back to sleep. A little Mad Men might help, I thought. I watched five more episodes of the dreaded season seven. Don Draper has become the Richard Nixon of advertising, and they're going to kick him around for a little while more. Nobody seems to want him there any longer, except maybe Roger Sterling, the closet sentimentalist and self-preservationist.

Draper was a self-defined man, all the way up until he cracked a little; letting the definitions of others seep in, then those definitions soaked him. I mean, he had made some mistakes. He had violated the advertising code, to never allow a meeting with a client to veer into unpleasant territory. At a conference with Hershey's he spoke candidly and honestly about himself. That was all it took. There is one thing that will not be tolerated in advertising and marketing: honesty.

They let him come back to the firm, but with strict conditions. Just as he looks as if he's going to crack from one of those conditions he seems to pull it all back together. We'll see where it goes, what type of final characterization they'll provide for him.

For several episodes now he seems as if he needs a shower. His hair appears greasy and uncombed. To my memory, they have never shown him exercise, nor engage in any activity that might suggest an improvement in health. His complexion tells the tale.

He has won back some trust and warmth from his daughter, Sally, after the girl caught him fucking the neighbor. He does so, oddly, by suggesting that they dine and dash, after he explains that he hasn't been in the office and he was ashamed to tell her.

Honesty and trust are very slippery themes here, and everybody seems to have a different capacity and tolerance for and against them.