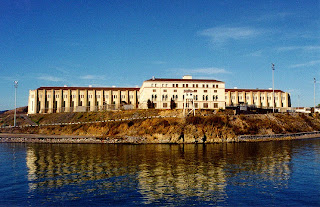 Transition fatigue.  There is so much to re-learn and adjust to.  Little things.  I know how to do what I'm doing but I don't know where I put the parts, either in boxes or in a new and different drawer.  I look, I look again, it's been moved, again.
Each day I drive to and from work through some of the most beautiful country there is.  I'm sure that soon I will tire of the commute but for now it is beautiful and I love driving with the windows down, music blasting or not.  Once I enter Sonoma there are two ways to get home, basically.  One is a little longer but it is perhaps the best part of the drive.  It is through vineyards framed by beautiful golden hills,  peppered with green trees. As the sun sets the color temperature brings out the most amazing colors and shadows of the rolling mounds.  It is a delicious place to live.
I work across the bay from San Quentin State Prison. It is almost all that can be seen from across the bay, that and the mountains and clouds behind it.  It is a very serious building and one clearly not to be trifled with. Scott Peterson is there for having killed his pregnant wife just before Christmas.  He is in like-minded company, presumably.  There are many infamous inmates there: the "Dating Game" killer, the "Night Stalker", Charles Manson was once imprisoned there.
Art Pepper, troubled jazz musician and drug addict, a former resident.  Merle Haggard was also once an inmate there.  He wrote a song about it,  "Mama Tried"...  Two of California's best.
Black Bart, celebrated "old-west" outlaw, stage-coach robber, and poet.
The last execution by hanging was done there in 1942. The most recent execution by lethal injection was Stanley Tookie Wiliams, leader of the "Crips" street gang (formerly), and celebrity author of children's books concerning San Quentin (written once imprisoned).  Barbara Graham, whose story was fictionalized in the movie, "I Want To Live!", and also met her end there in 1955.
It boasts the largest death row in the country. Take that, Texas....  Well, sort of.  The Texas death row system is fully functioning, they've recently added an express lane.  It is a very pro-death state. One might assume that they'd be happy to take the Gitmo transfers. Who knows, perhaps ol' Gov. Perry will solve at least one problem, Texas style.  I'm with Selavy on this one. If they elect that fuckwit into the presidency then I  don't just tremble for the future, I grand mal for it.  Didn't Bush do enough damage in his 8 years?  How could the country so soon be ready for even more of that?  It doesn't seem possible. Yes, we did.
It is a grim place, that prison across the water, in great contrast to the beautiful weather that surrounds it nearly perpetually. Yesterday I looked across the bay at it as I was getting in my car and I imagined the Johnny Cash concert there in 1969.  Those guys must have raped each other for weeks after getting a glimpse of June Carter, an actual woman, in the flesh.
"In this here cell you're gonna be June for a year...."
Ok, more on rape and land and Texas later.
Posted by Sean Q6 at 10:21 AM