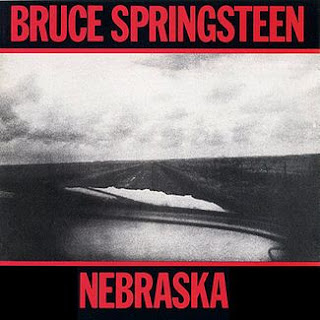 I recognize that each generation must have their prophets, bow to their gods, salute anthems, raise flags, revere their present, then their past presence... they curse their demons, then collect, coil, execrate, anathematize, and one day praise.

Each generation must moan, all too often on Mondays.

I was 14 years old when "Nebraska" came out, the acoustic album by Bruce Springsteen.
I didn't mean to suggest that the state of Nebraska "came-out" of the closet, they haven't, yet.
The album spoke to me, in a way that only a few albums had, many of them just before my time.

The Clash's "London Calling" was a notable exception. These two albums genuinely constitute "my time."

The depth and width of Nebraska continues to speak to me today, as does London Calling.  Who would have ever guessed that the spiritual vacuity of London was somehow parallel and corollary to Nebraska in 1984....

I could be wrong, but the albums speak very similar messages.  One focuses on the inwardness of others, the other mediates the necessary  outwardness of the inner self.  Then they both alternately accomplish, and assume, the task and role of the other album, gracefully, to the end.

Both albums are works of genius and among my all-time favorites... full-moons be damned, fuck the facts.

Long live the A-B-C's
That might be an over-simplification, and it might only make sense to me, but I doubt it...  They are human albums, made for humans, by humans, within a stone's throwing towards sacred, towards me.

My best-friend from the neighborhood in 1984 was Bobby Williams.  The release of Bruce Springsteen's "Born In The U.S.A." was a nearly unspeakably shared triumph for us, the vindication of an artist we mutually loved, adored, imitated, worshipped, believed in.  We blasted these rock-and-psalms up and down the Wekiva River.  Glory Days, indeed.


Like a river that don't know where it's flowing....

With success comes sadness. With triumph comes loss.  All is loss, love most of all.

It is gone in an unseen tender flash, like the receding of a great wave, then an unrelenting undertow, nothing else...


The following year, 1985, I met Selavy, as is recorded by the numerous county arrest records.

I spoke with Selavy tonight.  He assured me that he was going to take the "high" road about his deviated Septumber "harpy-moon" debacle.  We'll see.... I really want him to have that high road, he could use a little less oxygen, his handlers keep a gaseous eye trained on the neon noble dials.  He assures me that his endless humor about science is undaunted, untainted, soon-to-be-expunged, exorcised back to health.

I want it for each and every one of us. I want it when I don't know where else to turn, when I am weary and searching for an unfamiliar freeway or fjord that is meant to bring me homewards, inland, when it is dark, when I am already home, when I am also lost there, when I awake suddenly with questions that sinister sleep slips towards my susceptible senses... snakes and sinners and saints and saviors and soldiers and sinners and sailors and suckers and sinners, and spirits, or sponsored souls, along with allied associates, dead or living, freshly, newly, or never forgotten.  Ought'n that be the simplest situational solution, like the hissing of pissing answers...

It is all just a sad neither.

I want the lives of those around me to be as great as ever-returning youth.


But I won't wait for that, or truth, either.