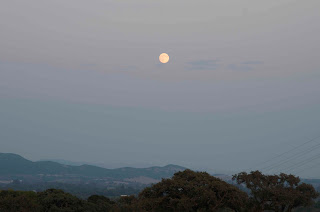 The night of the Harvest Moon my wife and I went up onto a hill to watch it rise over the valley.  Once we got off of the main road, which is already quite rural, we were on a dirt road heading up into the hills on the West side of Sonoma Valley.  There were just small houses and farms peppered along the way.  As we were driving further up the hill towards the summit we encountered a guy who appeared to be a farmer driving a 4-wheel ATV down the same small dirt road we were driving up. I pulled towards the right side and slowed to a stop. He could see that I had done so and he likewise slowed to a stop at the driver's side window.  I explained that we wanted to watch the full moon rise and where did he think would be a good spot. He pointed to a road that led to a gate perpendicular from where we were stopped.  This was sensible and we were happy to find a place to settle, the moon was nearing its rise.
We pulled down the road almost to the end, which was only about 150 feet or so and parked the car.  There was a vineyard to our right when we got out of the car, an equestrian pen in front of us and slightly to the right, an open cow field in front of us and somewhat to the left, a few rusted trucks in the open field, as well as a couple cows.
Here's a pretty good overview image, minus the cows, which were too far off to the left to be seen. 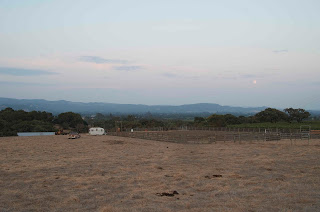 My wife had made some food for us and I opened a bottle of wine and we sat and enjoyed the vista with our dog Barkley sniffing the air suspiciously towards the unfamiliar cows.
All was well and nice.
There was a lone house behind us and a row of tress leading back down the hill from the way we came with some houses obscured behind them.  I include the picture below to attempt to flesh out that part of our surroundings.  To the right of the picture, just of the edge of the frame is the road that we drove up on. and parallel with that road, behind the trees, are some other houses that we couldn't see very well. 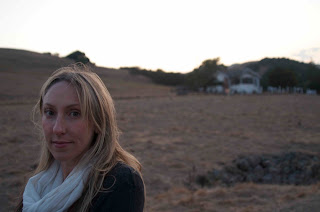 As I had described earlier we had driven down a small dirt road to a gate so that as we were leaving it was necessary to make about a 6-point turn to turn all the way around.  As the field was relatively flat I decided, once I had put the car in reverse and was about to begin the process of turning around, that it was much easier to just drive slightly across the field to accomplish this meager task.  So I did.  It excited my wife in that Oh no, you shouldn't be doing this  kind of way, but there was no harm in any of it, just a little bit of innocuous excitement.
We made it quickly to the end of the road we had been on and turned right to head back down the hill towards home. Just after we had made the turn I heard three gun shots in very rapid succession, probably from a small gauge rifle. In unison with the shots going off a massive black-ish bird in the tree next to us spread his wings and took immediate flight away from the car.  We could hear the sound of his immense wings flapping to achieve sudden flight.  Two of the bullets I heard hit the grass towards the front of the car.  I don't know very much about rifles but this didn't seem to have the boominess of a shotgun. It sounded more like a .20 gauge, or maybe even smaller.  The rapidness of the shots also made me suspect something other than a shotgun, as did the number of shots, 3.
Again, I know very little about guns, but this was my assessment at the time.
The estimation that I made to my wife, 23 weeks pregnant, was altogether different.
Lying, "I don't think those were gunshots, they sounded too thin. I think it was somebody just hitting a piece of metal with a hammer or something."
I didn't speed up noticeably nor did I twist my neck back out of the window to give him something better to shoot at, but I did glance over to the left to see if there was anything to see.  My head swirled with gun-toting visions of ignorance and evil and legal murder for trespassing. There was nothing there to be seen, the trees were blocking any view we might have had and the sun was all the way down.
The pictures I've included above are misleading, they were shot as much as a half hour before this incident.  Here is a more telling image, shot only minutes before, with the flash on. That's a rusted out old truck in the foreground, only 20 feet away from me or so. 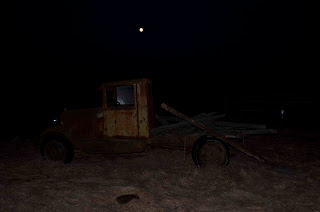 It wasn't quite that dark to the naked eye, but you get the idea.... The sun had set.
Later I relayed the story as I knew it to be to my wife and our friends.  They've lived here for 11 years and they claimed that nothing like that has ever happened to them.  If it had not been for me hearing the bullets hit the grass outside the driver's side window I would have rationalized away the experience as well, convincing myself of anything convenient to avoid coming to terms with what had actually happened.
When I say that we are going through much transitional anxiety to live here, for once, I'm not overstating.
This is the second time in my life that I've been shot at. The first was a much closer scrape with death. Perhaps one day I'll tell that story as I remember it.  It involves a handgun, 5 shots at close range, and then an arrest for attempted murder along with a few other charges.
Life is short.  At this rate I'll probably get shot at once more before it's all over.  Somewhere out there is a gun and (probably) a man that will point the gun towards me and pull the trigger.  My only hope is that the thought of doing so has not already crossed his mind. I'd prefer if it was something thought up on the spot as the last two were, though with even feebler intent and marksmanship.
.
Posted by Sean Q6 at 9:17 AM