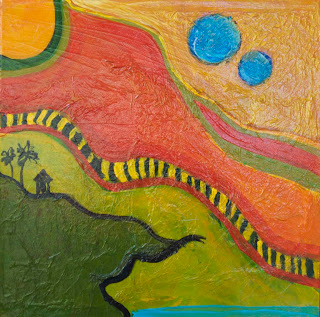 Breaking News from AP : "A stolen piece of artwork by Sonoma artist L. Murray was recovered by a lone agent, operating independently, from a San Francisco home late last night. The alleged suspects are being beaten in place of traditional questioning."

That was all that came across the wire.   There would be more, there always was. This case had been opened for 5 years or more. There had been no new leads in years.  The file had grown cold.

It began in Sonoma, approx. 2006.  Famed and beloved New York resident, wine and art lover, Q6, was visiting on business.  At a dinner party the piece in question was given to him as a gift by the artist, L. Murray, for his suggested and imaginary philanthropic works.  He returned to San Francisco the next day, leaving the piece at Ms. J.K.'s house.  She was a trusted though troubled friend. He emphasized that the well-being of the piece was paramount.  He made plans to retrieve the piece upon his return where it could be transported more safely.
Months went by. He had believed for there to be no reason for him to check on the piece, so he didn't. He went on imagining other charitable causes he might one day speak of, or mention casually in conversation, hoping that the idea might snowball into something of substance.
When he finally did return to San Francisco several months later he made all the necessary preparations to retrieve the work.  It was nowhere to be found.  J.K. played traditionally dumb, but this time suspiciously well.  She had him search the entire apartment in vain desperation. It took him nearly a day to inspect each and every closet, crevice and crawl space in the apartment.  It was gone, vanished without a trace.
After much consternation, worry and verbal pressuring it was finally revealed by J that she believed that maybe I. Meron, a mutual friend, had "borrowed" the piece.
Now here is where the story begins to get suspicious.... Q asked J over and over again how she could possibly know of, and have allowed, such a thing to happen when her responsibility was to watch over the piece and keep it safe?  She hemmed-and-hawed and looked nervously away but provided no real answers or clues as to what might have actually happened.  Again, she played even more witless than before, though the cracks in her performance were beginning to show.

Q asked I. Meron what had become of the piece. He also acted in a likewise manner, silent and nervous, claiming that he did not have it and he was not quite sure what had become of it. Though he did seem to express some vague knowledge of the work's whereabouts, but without any of the necessary information to retrieve the piece. He had already begun to weave his web of accusation, deceit and denial.

The petty art-thieves, I. Meron, and an area SF Cop who had been assigned to patrol the many faltering bathhouses of the SF area, working under-many-covers but mainly as a free-spirited towel boy, moved in together and began decorating their place without raising any suspicions or alarm.

The case was nearly forgotten for many years.  During that time Q had a wedding ceremony in Sonoma with the woman he had previously eloped with, R.C.  The artist, L. Murray and I. Meron. were both in attendance... what irony.  At this time the case had been shelved and suspicions ran relatively low, at least as far as stolen art was concerned, which was very lucky for Meron, an unknown art-thief and international lover of both meat and style.


Two more years passed.  R.C. and Q visited SF/Sonoma the following year to celebrate the artist's 40th birthday in Sonoma and to play the part of two New Yorker's on a night out in SF for a Halloween boat party the following night in San Francisco Bay.  They visited the home of Meron and The Cop, hurrying to get ready to go out for the evening, sitting in the kitchen chatting over a bottle of wine, even.

The case was so cold as to practically be closed.

The victim, Q, and his wife, eventually moved to Sonoma in late summer of 2011.  On an overnight trip into SF he came by Meron and the bathhouse Cop's domicile of art iniquities.  These two will hereafter be referred to as either the mutual perpetrators and/or co-conspirators. While sitting in their kitchen Q glances up at the yellow wall and voila', case closed. There was the stolen piece hanging in full view, where it had apparently been for several years.

He immediately called the FBI and they came by with a couple goons to arrest the two "alleged" thieves and take them to a sealed basement off of Mission St. where they took turns negotiating the terms of a confession out of them.  There were no witnesses outside of law enforcement to hear the confessions made from hospital beds later that same day.  It was a tragic turn in a case with few clues, and even fewer truths, as to what might have happened.

They of course turned on each other like two water rats deserting a sinking ship.  They started giving state's evidence on one another like bickering rodents stuck in a whirling cesspool of public shame and sexual humiliation, though no strangers to those feelings, they eventually cracked.

When confronted by Q neither of them showed the slightest sign of remorse or regret... at first.  In their confused, beaten and drug-addled condition they actually tried to assert that J.K. had "given" them the piece, each unable to understand that it was not hers to give, so it could not have possibly made any genuine transfer of ownership.

Criminals never seem to understand that what they have stolen never really becomes theirs.  It is a very sad thing to witness.  Don't do the crime if you can't deep-throat a lime... someone once said


The work was returned to the home of its rightful owner and his wife where it is now protected by what many consider to be the most ferocious guard dog ever naturally bred.  This inhuman beast stalks the perimeter of the compound searching only to kill and then devour any suspiciously acting strangers that happen to end up in the grip of its jaw of terror.

The co-conspirators returned home on bail briefly and posted this image, of the blank wall where their shame used to hang openly for all to see, as if by some magic turn of events they themselves had somehow become the victims rather than the petty art thieves and bathhouse towel boys that they actually are... Notice the skewed vision of the photograph, the tell-tale sign of a twisted criminal mind, unable to align its vision with the rest of the world's, forever doomed to exist on the periphery of good taste and simple American honesty and decency.... 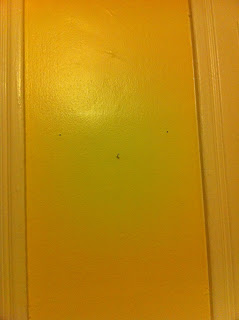 (where their shame once hung freely)

The city of Sonoma is rallying together behind the actual victims of this case to raise money to keep these two miscreants behind bars and to educate children on the many evils of art.

Q and R.C. are just happy to have the piece returned safely home. He has continued his work in charitable imaginings.

L. Murray is likewise relieved to have the piece return to its intended owner after so many years away. She has dedicated a weekly meditation class to recovering all stolen art everywhere.

J.K. is completely unaware of any new developments in the case. She is preparing her legal defense by watching CSI: Miami.

I. Meron has turned to god and swears to one day make restitution to the victims of his crime. In fact, he has promised to return double, possibly triple, the total value of the piece to them in hard-earned US Dollars, including interest and factoring in for inflation.  He is committed to a vow of celibacy for the remainder of his days, saying, "It's the least I can do."

The "Cop" has become a favorite prison plaything, being renamed "June" after only his first week served, a term of endearment he earned shortly after being de-loused in the prison's shower facilities.