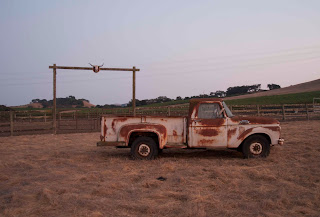 I wrote this a few days ago but didn't post it.  After Selavy posted that I had mentioned attacking his grammar, a joke, I thought that he would think today's post about him and further perpetuate his already shameful behavior.  Grammar just happened to be on my mind and I blurted it out, my mind fuzzy with wine, celebrating the third harvest moon in a row.

A friend recently pointed out that I am not actually from New York, that I am just a hillbilly from some place called Lumberton.  I checked into it, it turns out that it's not true.  He laughs at my struggles to acclimate to a more rural lifestyle. I suppose it is funny, to witness from a distance.  It's not as if it is that difficult to adjust.  It's mostly the people I'm forced to interact with now, not so much in Sonoma but in Corte Madera.  I mean "the others" from across the river and beyond the hills.

Today Rachel was working at a yoga studio and the guy who previously worked there, who is leaving for an 8 month program at circus school, arrived to help ease the transition, riding a unicycle.  After realizing that he wasn't really needed there he departed in similar fashion.  When I tell you that this place is surreal it's not because I'm smoking an unusual amount of pot.  It really and truly is a strange place.
More on rural uni-wraiths later.

I have given some thought lately to grammar, what it means.  I'm divided on the subject.  I prefer my misuse of language to the misuse of others, predictably.
The purpose of grammar is to assist in the conveyance of meaning, its intention is to help aid clarity by generating useful recommendations for composition.  There are some grammatical suggestions to help improve clarity but we can use language to suggest freely, as we wish to.  The English language has been exhausted neither of mistakes nor of beauty, nor purpose.  There is no such thing as a grammatical "rule," any more than the bumps on people's heads give us insight into what "race" they are.  Grammar is a failed pseudo-science.  Each person has their own set of grammatical choices, though there is a large collective set that people commonly draw from and mistakenly refer to as "rules," which they then confuse with natural laws, always as a way to correct someone else's usage.  It is prohibitive and corrective, its purpose is to constrict as much as it is to assist.  In pronunciation one need only consider the "Queen's English" to see this impulse in fully disastrous effect.

There are only "stylistic choices", some that work, some that do not, like putting the comma outside of the quotation marks in this sentence, or using commas to make an extended sentence that might otherwise be divided into several shorter sentences, like Jose Saramago, Nobel-laureate, from Portugal. To speak a language is to own it, part of that ownership includes the right to change the language.  If there were actual rules to language that must be adhered to, punishable, then there would be no poetry, no song, and very little literature worth reading.  Bob Dylan and William Shakespeare would have been taxed out of existence long ago.  Lie Lady Lie...
If we have an obligation to correct the use of language then certainly we must also have an obligation to correct literature, arguably the richest source of language. We should be impelled to rectify the past, to align it with our developed understanding, to update it to our advanced standards.  But very few argue for modifying literature to make it more appealing to a current audience, more palatable to the modern mind, advancing it in step with the times.  Ignore the efforts to "correct" Mark Twain's masterpiece.  It is a different category of mistake occurring there.

Conversely, if we are to respect the past by leaving it as it was, or is, we have no such alternate obligation towards the future. In fact, it becomes our responsibility to pro-actively affect language and make changes that reflect our time, its various needs and changing uses.  Somehow texting fails this task.

Pedants argue that misuse transmits unintended meanings. But that is perhaps only true to the pedant. To correct assumes that the pedant alone understands the intended meaning. "Correction is the vicious idol of snobbery." - Jacques Barzun, From Dawn to Decadence

The other examples I feel contrarily about.  If you're going to abbreviate or compress meaning then it should result in something "more" than it was otherwise.  If you sacrifice clarity for brevity without producing beauty, or something more suggestive, then you've detracted from the world rather than added.


For the sake of convenience many of the people that I know argue for an extreme version of mitigated literacy: text-speak. With the omission of vowels, or the use of vowels as a substitute for words, they communicate using the same set of letters but in a supposedly economical way.  "r u" substitutes for "Are you?"  It seems sensible when one considers the danger of texting while driving, or the inconvenience associated with any excess time spent typing out a message in text, or even an email, especially when done on a phone, in a car, at high speeds, drunk.  The sheer burden of language overwhelms the owner of one of these modern devices.
But letters are free, sort of.  If you get charged per individual text then one would think that the sender would include as much information as possible in each transmission, rather than cheating themselves out of entirely unused alphabets.
Also, much of what passes for language now is merely auto-correction.  It is acceptable to transmit errors because we all understand that it is the fault of the device and not the user.  Guns don't kill people, etc.  If you bother pointing out to somebody that their text was error-ridden and caused you some pause in trying to decipher its meaning they will actually get mad at you, as if it somehow reflects poorly on them to have had their device not convey only the highest standards of grammar at their unseen behest.  To make known an error in communication is to question the sender's ability to purchase devices that adequately reflect their education and sophistication.
David Foster Wallace perhaps missed his true medium.


Some of it is cute, texting, I'll admit it.  I have gotten texts at just the right time, consisting only of letters that have melted my heart: "lv u"   Less is more, etc.  But it's as if this replacement language, even when confusing or misleading, is defended as pertinent by those who use it, as if the real language that it ostensibly reflects is too burdensome and unwieldy for actual use.  We are expected to have known the author's intentions based on their abbreviated misuse and in the context of which it was employed.
Ah, I see... you were in a rush so you didn't have time to type something that I would understand, instead you thought that I would intuit your meaning based on the lack of information presented.

I've long argued that rappers not only have the right to change the use of language, they have a responsibility to do so.  If language, as it is, does not adequately reflect them and their condition (as the claim goes) then it is up to them to change it as needed.  Many of the most clever, creative and informative verbal (mis) usages I've been exposed to have come from rap.  However, I work at a place, and with many young people, that only seem to know how to speak in rap terminology,  There are times when I can't understand a single meaning they are projecting, except by body language and reaction.

The burden of clarity falls more fairly on the speaker than the listener.  All of the words they use are within my vocabulary, but their intended meanings have been stylistically obscured beyond recognition.  They seem to be having fun, having no problem conversing in this way with people born in their decade, or the one before theirs.  It is trying to make that multi-decade leap that seems to cause the breakdown.  I try to understand, but can only accept so much responsibility for failure to do so.

Tupac Shakur was from Lumberton, I learned earlier today.  I wonder how much of Shakur's vernacular I've adopted without knowing it.  I often bait people with the effect of rap on our culture. Most people that I know cite its perceived damage to language, theirs.  Few have given it the consideration it deserves, or if they have they do so only placatingly so.  Teachers nearly universally hate it, fight its effect.
But has there been a great text-speak work yet? Is the Nobel committee adequately examining this new force of language?  Dunno.

I realize that the various assertions I've written above are incompatible and in some ways assert different sides of the same subject, presented conversely.  Sobeit.

All words are fiction, hazy suggestions, chimerical structures, buildings made of rivers, machines made of ghosts.