Sodom at the healing waters 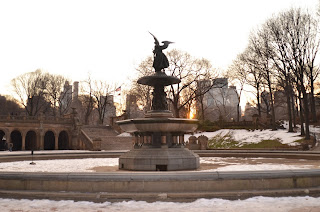 We were watching a documentary series on New York recently and it chronicled the creation of Central Park.  There were shots documenting the building of the fountain and the surrounding area.  There were details about the cost of labor and the tough economic times. The park is one of the great achievements in urban planning foresight.  Very few other major cities have anything that even compares to Central Park. Or if they do then the surrounding city holds very little comparison.  It is like nothing else, it is a triumph of urban restraint.

There is a place called The Boathouse not far from here.  When Rachel and I returned from our first real trip together we went there and sat and drank wine. It was there that we decided that she would come to New York to live with me.  We had just gotten back from a week in Costa Rica.  It was the week that we fell in love.

The sculpture on top of the fountain was the first major public commission ever  granted to a woman in NYC.  It is an angel, I guess.  I always imagined angels to be more flight-ready, but what do I know of such things... the wings have a very feathered-pterodactyl form to them. As if an angel, through celestial inter-species mating, took on the partial form of a bronze bat and a steel dove.  After many years it is still perhaps rabid and to be avoided.

The surrounding area is called Bethesda Terrace, named after the healing pool of Bethesda from the Christian myth, according to Garp.  Ok, no more of that talk.  People have been praying for me lately... It is not nice to be ungrateful to the cosmic well-wishers, mumbling their folksy incantations to the stars.  To be sacrilegious to the great Jesus in the sky is a bad idea, rapture or not.  That is how people get herpes, and why that particular affliction is permanent.  It is God's reminder.  He doesn't want to have to work as hard on judgement day.  He never really predicted the population explosion. He got in a little bit over his head and he's been doing a little pre-judgement in the last few centuries or so.  I bet he wishes he had two sons now...  Looking back at Christianity I do see that Jesus acts just like an only child.  He just lays it on so thick with the whole "christ" thing.  I am the chosen one.

You don't want herpes do you?  Speak up Lazarus...!

Though... the pool at Bethesda is said to have healing powers, once it was blessed by the angel.  Could anything reek of witchcraft more than these silly bible stories?  But if there is any truth to this then all of those inflicted with herpes, syphilis, or worse should meet at this fountain and bathe their genitals in it together, to heal their iniquitous and rotten organs.  I'm sure the bronze angel of Bethesda will restore their aching mucous membranes, cleanse their Sodoms and Gomorras

Weren't those well-named biblical locales?  They sound just like ancient venereal diseases. Sodom became so famous for its particular brand of impenitent deviance that we named some crucial hate laws after it.  Why is a hate-crime punishable with mandatory sentencing guidelines but a hate-law practically irrevocable?

Lot famously would not hand over two male guests to the men of Sodom so that they could know them. Instead he offers two female virgins that they can do with as they like.  Weren't those just charming times.... Just a paragraph or two away from chucking the virgins into a volcano to appease the father of Abraham.

Before somebody issues a fatwa against me I had better stop.


Well, anyway... I had nothing to write about this morning and I found the picture above. I was doing pretty well up until The Old Testament jumped onto this post from out of nowhere and sodomized it.

In truth I have mostly come to peace with the concept of Christianity, though not as much with Christians.  There was a time when they made some good buildings.  I'll leave it at that.

For those of you also seeking to come to terms with Christ an interesting piece to read is Oscar Wilde's De Profundis. It is worth doing research about this piece before you read it.  An article that I found helpful was Jacques Barzun's introduction to the reprinting of Wilde's letter.

If you have no impulse to make peace with the concept of Christ then the alternate pieces to read are anything by Christopher Hitchens, Richard Dawkins or the Marquis de Sade.

"Lust's passion will be served; it demands, it militates, it tyrannizes." - Marquis de Sade

"Most people are other people. Their thoughts are someone else's opinions, their lives a mimicry, their passions a quotation." - Oscar Wilde, De Profundis