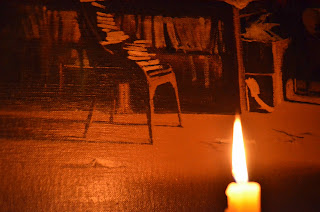 I have perhaps wrongfully found humor in my father's aging. As he hit his mid 70's I chuckled to myself at his sometimes bewildered line of conversation, his loss of hearing, his withered stature.  I was wrong, of course.  He's 79 now.  He is still together but no longer the father-threat that he was in my teens.  Now he is just an old guy whose friendship I seek, though under the diminished and irreversible terms of age.

I'll probably never get it right, age.  When I look back at my life and the various ways that I've lived it I see lots of error, decades of missteps.  I didn't spend much time growing up because I thought that I'd never need to, that it was possibly a bad bet.  This almost earned me an addiction to any number of things. Some would probably say that my use of the word "almost" in that last sentence would be funny if they were only reading this without actual reminiscence. I have an obsession-based personality.
But as for my father... I only began to really like him in the last few years. I built up a pseudo-hatred for him that was perhaps based on my literary idea of what a father is, and why it is important to resist and deny such a beast, as much as it was built on the actual man who seemed distant and cold for much of my youth.
My father's ideas of love (I'm making assumptions here) was to provide for his family. To make sure we had: "a roof over our heads, clothes on our back and food on the table..."  In this way he was much like a Scandinavian country. His reformed socialist agenda was admirable and functional if not examined too carefully.... If it seems to have failings then just compare it to America to improve results, etc.
------
Ok, I wrote more but deleted it.  Time to move on with the day. This post would have worked better yesterday perhaps...
.
Posted by Sean Q6 at 6:19 AM