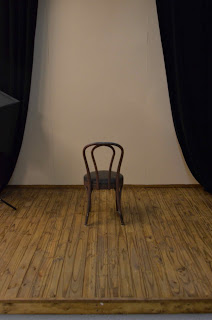 Throughout my life I have been often accused of taking issues too seriously, or not seriously enough.  I have had much persistence in being excessively serious when there was very little need to be, often to the point of boorishness or mawkishness.  It can sometimes be a fault of character; or maybe it is only a fault of behavior.  Is there a difference?

Alternately, I also wrongly believed that all things could be laughed about, that nothing was above humor, that laughter is a perfectly valid reaction to the range of human experience.  I was quite wrong, of course.  The ravages of AIDS and various other developments during my lifetime revealed to me that there were some things that humor could not approach.  Or perhaps I should say that my humor could not approach, my humor could not help.  It was a place where my sense of humor had no rights.  If I had contracted AIDS then I might have another story to tell, or have told, and it might have harbored some humor.  Hopefully I will never need to put my sense of humor to that test.
I am much more careful with what I subject to my humor now. Though many among my friends might not notice this.  My sense of the absurd remains strongly intact, but I am much more selective with its uses.


A friend once suggested that the source of my humor is only an internal misery that one day must be let go.

I hope not. But uncritical derision is something that is leaving me.

Love is a seemingly simple accomplishment, a small task. But one that is difficult to live without for long, if not impossible, for me.  I have given much recent thought to both the mere adequacy of love and then to the fullness of it, to the chasmic disparity between these two shapes, and then beyond that: the further disparate condition of loss. The empty echoes of what was hoped for. The time that stretches out ahead of us, often without mercy, without end.  Without the one for which we would do anything but can do nothing.
When love is fulfilled it finds its natural course and it seems as if it was meant-to-be, that it was ordained by the stars, god's plan, etc.  But that is all hollow barbaric nonsense.  For what are we to think when it fails?  Is that also god's plan for us ? Is it? The vindictive stars have tricked us once more?  The evil galaxy conspired towards our unhappinesses once again.  But fear not... Jupiter is again rising just beyond the horizon.

Or even more faint: god's work is a mystery to us, as he works in way's mysterious almost exclusively, except for the dictate that we must kill his son to fully enjoy his eternal love.  It is written.  Yes, of course, it's clear now.... He revealed the triumphant redemptive truth of Christ, his son that must sacrificially die for us, by us, for our sins... but every other unanswered pain that we experience is explained away as part of his majestic mysterious loving plan.  Well, he must have prescience because it at least sounds like he knew The Beatles were coming.

Accept this one implausible truth: eternal guilty happiness... but it must arrive at the cost of denying all other truths and understanding.  God's love arrives only on the outstretched wings of a sacrificed phoenix from Jerusalem.

I used to be a Scorpio, but now the solar system's relationship to the galaxy has sufficiently shifted to make room for yet another sign.... So now I suffer deep-seated astrological uncertainties. Is there no end to the galaxy's attempts to communicate human truths to me by the relationship between the earth and its celestial counterparts?  If only there were untutored human portals through which god's obscure plan could be slowly eked out to me... people who were able to make some sense of the stars, and their unique message to me, to my life, just within affordability.

The human heart is so easily talked to.  Sometimes it is all ears, other times all mouth, yet again all teeth, and lips.


Astrologies.
The stars are quite beyond me in that regard, as are the planets, save this one as being much less so.  It is hopeless for me to try to understand by what justification people think and talk, in that way.  I have tried. The results of my inquiries are dismal at best.  I lapse into raw unflinching criticism and condemnation when I am at my finest, and placating ironic complicity at my most amoral: devilish, leading the witness, praising the unknown wonders of the gentle and mostly agreeable universe, etc.

The more of it I hear the more confused and enraged by it I become.  The pretext for most of it is staunchly defended, personally shared, ignorance alone. An unapproachable ignorance that we are expected to quietly and reverently respect as a point-of-view, or a belief system.  One would think that people would be ashamed to talk in that way, to reveal their deeply held inner belief that the world we live in, the pains we endure, the joys we create, are all part of their lovable god's eternal plan for us, or much worse.... it is written in the stars.... but don't worry... truth's are just as quickly re-written... they've just re-published the Love Signs book, with birth-chart updates, don't you know... have you heard?  What next for feeble minds...

Have you ever noticed how very little room for error there is in a cardboard carton of beer? How is it that man can do something so dully precise and yet god is still meandering around the vague meanings of what it is to be a libra this week, and whether it's advisable to take risk at work, home, or in love?  Man's triumphs are not a reflection of god's plan, they are evil and iniquitous, and are on their way to being stopped.  It is written. It will be re-written.

That theocracy still exists in this post-enlightened world of ours should bring any thinking human pure un-satiated rage, not pause and reflection. As a deeply astrological people we made the mistake of affording and allowing organized ignorance a position of political privilege and power.

Are there any astrological signs that account for ignorance?

Sagittarius: you resist breakthroughs in knowledge, this is explained partially because you are reading these words. You should lead a nation of people toward despotism and misogyny.


But hey, I'm just a Scorpio. These sentiments are to be expected of one like me...

I lost my point.  I was speaking of love.
Love is a concentrated and sustained effort, and yet it is still very temporary; oftentimes only fleeting, flashing before us for a mere sincere instant.

Only once in our eyes, lingering amongst the eternities in our hearts, though rarely sustaining.

Love becomes the most painful echo, nearly drowning out all other reminisces, rendering memory useless to other causes, save awful fact.

If any human capacity can travel through space and time, both backwards and forwards and back again, across enormous distances, it is our capacity to love, and remember love, even to re-love, with diminished or increased consequences.

To imagine love is to experience it.  To share your imagination first with another is to create, then it is to reach and break away from the very act of creation.

To remind one of love is to religion it.


To truly love is to do away with god.

This is ever unwritten.


Love must always be the genesis, the impending exodus.

It is awfully ridden horrible.

Beyond that I trust myself to say no more,
to risk further angering the zodiacal stars above me.