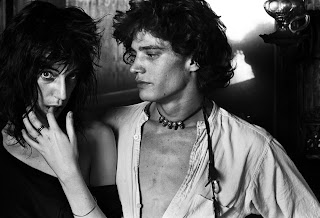 I finished reading "Just Kids" by Patti Smith.  It was a good and easy read, a time in New York to which I am drawn. The rock, art and writing of that decade (the late 60's and 70's) still has a lasting effect on me.  I used to sometimes get a copy of The Village Voice when I was young and I would scour through the pages to see what was going on in New York, who was playing at CBGB's, thinking it to be the center of all possible universes.  This continued all the way up until the 90's when I developed further interests, in other places, other types of music.

The story that Patti tells is partially a convenient falsehood, but a charming one.  It is as if she never met an ordinary person in her life outside of her family. She goes out of her way to tell us that after a specific incident with Robert Mapplethorpe she goes to get a sandwich and on that day she meets Allen Ginsberg, who gives her a dime thinking that she was a very pretty boy.  Ginsberg plays no further role in the story, it was just a perfect time to tell the audience that she had met him under funny circumstances. Her encounters with Jim Carroll, Sam Shepard, Todd Rundgren, William Burroughs, and every other celebrity are told in the same manner. As if they're the only people that she ever met and it was always a coincidence, and also on the same day that some other memorable thing happened with another celebrity.  She tells an elaborate story about being asked out to dinner by Sam Shepard and not knowing it was him.

For somebody who has their eye so keenly fixed on celebrity it is difficult to believe her.

Poetic license, I believe it is called.

Bullshit, also.  I pity anybody in her world that might have had a profound effect on her life that did not subsequently become, or already arrive, famous.  They would have been left out of her reminisces altogether, coincidentally.  But it was still a good read, even if her attempts to convince the world of her reluctance towards rock success start to sound as if she's just trying to convince herself of greater unused talents.  I mean, she has talent, lots of it.  The book is very well written, thoughtful, beautiful, and even heartbreaking at points.

She acts as if she was never really interested in being a rock star either, and didn't even know that it was going to happen, much less really wanted it to. But was rather an odd by-product of her pursuit of poetry. Perhaps this is a partial truth.  But albums like "Horses" don't just magically appear in front of people that don't want to be rock-n-roll performers.  It is a great rock-poetry performance and one that did not happen by accident, but rather by very specific design.

But just like a kid she tells tales and takes joy in telling them.  One can't really fault her too much for it.  It was a dynamic life and one worth reading about.  It was a look back into a time and place that I so wanted to participate in, but only got glimpses.

Well, this is my book review of "Just Kids" by Patti Smith.  It won the National Book Award, which is only given out to the Nobel Prize Winners of Literature, Astronauts, Popes and Saints.  Patti Smith is all of those.  No, wait, maybe that's Laurie Anderson.


I can't even write about something that I liked without being critical of it.  I need to practice civility and benevolence.  They say that you get better at that which you do more.

So: I really, really liked it.  You should like it too.  Liking things is healthy.  If Christ were on Facebook I would absolutely adore him.  I can see it now... "like" not, lest ye be liked.


I still haven't gotten my mind back in full yet.  I don't even know where the christ/herpes/fountain came from earlier this morning.  I tried to tell a sweet story about a place of tender memories. Before I knew it I was screaming bloodshot kamikaze daydreams.