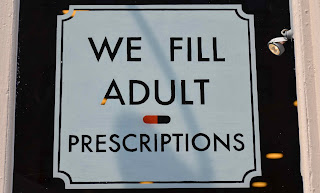 I must warn my readers that today's post might be upsetting for some of you. So only continue reading if you believe you're in the mood to be insulted, in one way or another...
I don't know why the mention of Facebook angers some people so much.  I referred to it in yesterday's post and it elicited this response from one of my friends:

Facebook?!?  Jesus Christ, how old are you?  Perhaps you (and all your "friends") are trying to retain your youth.  It's just like high school--oh, wait. . . did you go?  You'd be better off trying to date the prom queen, I think.  Wasn't yours a boy?  Oh. . . you didn't go. Stick with Facebook.
And if maids didn't want to be raped, they wouldn't be maids.  You (and all your "friends") have turned into a bunch of middle-aged housewives.  And I know a lot of your "friends" are that and are pissed off, but if they didn't want to be stupid they wouldn't be housewives, right?  Of course, they are "equal partners" with the motherfucker who brings home the money, you know, the sonofabitch who doesn't spend enough time with the family.
So fuck you and all your Facebook bitches.  I'm sick of hearing about it and them.  Jesus Christ, you are pathetic.


Now, some of this is funny, and some of it is true, and then there are the other parts of it.  My friend has been suffering from very intense menopausal seizures. He has had them for years and there is no known cure.  His hormone levels are off the charts and he has shed not one but two uteri already, his waning menses is a complete anomaly to modern science. Doctors have no explanation for it, and they equally have tired of his antics.  He suffers from puregrain alcohol headaches, he calls them my-grains.
As for Facebook... I just find it fun.  Is it just like high school ? Well no, not for me, but it does resemble it somewhat in the superficial way that you're able to interact with people.  But I like to be able to interact with people superficially. For many of them that is all I want, sometimes not even that.  But I get my laughs on the site and have been able to keep up with friends that I might not have been able to otherwise.  Now, here is the counter-argument that I often hear... If you wouldn't keep up with them otherwise then why would you want to on Facebook? This answer is obvious, convenience.  I never said that I don't ever want to talk to any of these people again and wished that they had inoperable bone cancer, or even that I'd prefer not to know where they live, or if they have children, or got married, etc., etc.  I only said that I might not be able to keep up with them otherwise.  Is that pathetic?
Why is that so insulting to the mind of a menopausal man?  He seeks to shape the world according to his design and Facebook does not fit into his wildly angry hormonal visions of the universe.  I'm currently seeking a court injunction to have his internet access denied under The Marchman Act.
................
Ok, enough about all of that.  I wanted to post some corrections from yesterday's column. The picture of the blind dog, this one here: 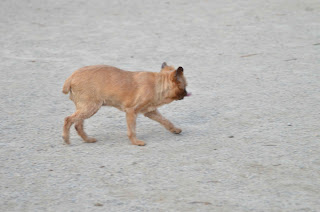 (Annie)
She is a girl, and my friend loves and cares for her very much.  I was only making the same type jokes as he had about her while we were at the park together. Perhaps they seem different when coming from another, or if Annie is the perceived subject of derision or humor. That's not what I meant at all.  I was just flipping through pictures looking for something to write about and I came across her picture, and I felt somewhat beaten-up from the day of drinking before.  I felt a strong spiritual kinship with her.
She is a sweet dog that is nearing her end days and my friend takes care of her. It is quite touching.
Ok, I'm out of time.  I have phone calls to make and paperwork to fill out.  I just got an email from a friend who is coming to visit New York. He says he is bringing his "friend", she is a ex-crack-addict that likes to get gang-banged, he says.  She's full of great stories, he claims.  It's really something, you'll love her, he says.
How do these even people get my address?
.
Posted by Sean Q6 at 9:07 AM