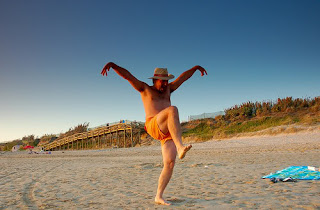 I am skeptical of most things. It is perhaps the source of some of my anxiety.

I am specifically skeptical of much of what is presented as a pseudo-anything.  The sort of easy fill-in-the-blank belief systems that particularly thrive in pockets of affluent capitalist culture, and especially ones that also claim some vague lineage back through time and space to the far mystical East.
My skepticism of this sort of thing is well known yet also somewhat contained by my wife's enthusiasm for yoga.

I have a friend who is a yoga / reiki practitioner here in New York.  He offered to have me come over and focus on some grounding techniques to help with the anxiety I've been having.  I took him up on the offer.
Before I go on any further I do feel that a brief explanation of my general thoughts on this stuff is in order. In these situations I am at all times deeply tempted with the desire to face the other person in a mildly aggressive pose and then say, "Bow to your Sensei! BOW TO YOUR SENSEI...!!!" Then I would assume a mock karate stance and whisper, "Mortal Kombat..." and start doing the victory dance while humming the theme tune.  Either that or chanting "wax on, wax off" with one leg balanced in the air, Karate Kid style.
It is easy to see why I have problems, no?
But this experience went a different direction.
We started with some basic yoga positions, all of which I am patently incapable of assuming.  Within minutes my heart is racing, I've lost all sense of my breath other than me desperately gulping for more of it, and I am about to fall over while crying out for help and mercy.  This is why I don't go to yoga studios and embarrass myself in front of roomfuls of beautifully shaped women who look like gazelles in slow-motion, come to life in poetic female concert form.

Every time I go to a yoga class I feel like National Geographic should be there filming it.  I just stand there looking around, astonished, hoping I'm not in the shot.
Yoga classes are a rare public shame that I generally do not grant myself, etc.
But again, my friend was patient with me. Having a basic understanding of my limitations in flexibility forced him to start off very slow.  With individual attention he was quickly able to focus in on areas where I needed help most.   Many yoga poses do not come natural to me. In fact, none do.  Standing with arms akimbo barely comes natural to me. As soon as I begin to think about standing I can feel my mind start to uncomfortably adjust my position. I will shift from foot to foot and put my hand in my pocket and check my cell phone to make sure that time hasn't stopped. Once I've confirmed that time is progressing along pretty much as it should be then I'll go back to not knowing how to stand, and wishing I could leave.
So I represent a challenge when it comes to yoga.  Once I have finally assumed a position then I have forgotten to breathe, or how to, and once I respond to his instruction to "breathe without catching your breath" then I will lose my balance.  If I don't fall over then I have already opened my eyes to clumsily regain my balance just at the moment when I'm supposed to be feeling the energy flow from one spot to another.
It is a very rare moment during yoga that I ever feel "composed."
..... "Breathe out and then hold for a pause before breathing in again."
... "Breathe out and then hold for a pause before breathing in again."
In time I could feel a sense of focus slowly coming to me. I could discern where the pressure was supposed to be on my feet, where the line runs through my body from one point to another, stretching strange parts of my physique that had, up until this point, only been used in car accidents.  Yes, I was sweating, and still not getting the breathing as smoothly as I would have liked, but when instructed to loosen a pose and sway from side to side I could feel various parts release and then respond to the positions.  I could feel myself, my body, slowly becoming more aware, more alive.
But let's not get too far ahead of ourselves.  My favorite moments during yoga are still when I'm allowed to release the position. Not as I am getting into the position.  And certainly not when I am being instructed to improve the position towards anything that actually resembles the pose in any of the time honored understandings of them as passed down from century to century.  The goal of yoga is tranquility and I still feel the most tranquil when I'm allowed to relieve the position, not as I am trying to distort my body towards it.
Spiritual insight is still a long way off...
But just as it was getting to the point where I was soaked in sweat, my breathing was becoming erratic, and my poses were failing in increasingly entertaining ways... my friend decided to change the focus completely. He arranged pillows in such a manner that I was to rest my abdomen and head with my legs tucked under themselves.  It is difficult to explain but it was a very restful position after all that I had endured.  Then after a few moments of relaxed preparation he placed his hands on the top of my head and held them there for a while. Then he moved to the back of my head, my neck, my back and in this fashion very slowly and patiently moved to where the bottom of my feet were facing upwards.  It was the closest that I have felt to being in a hypnotic state in many, many years. It was as if I was meditating in an almost fetal position, but face down rather than sitting up.
It was a wholly pleasant experience.  For a floating moment I felt as if I was no longer in New York.  I wasn't really anywhere any more, just drifting towards unconsciousness, but without ever going entirely into the darkness of sleep, and also without the jangled concerns that sometimes meet me there and drag me back into the neurotic halogen-lit labyrinthine halls of my mind.  My awareness of my crazed surroundings just slowly faded and dimmed to a comfortable and pleasing level.  I even ceased being aware of my own voice inside my head. All things, even the focus on my breathing, just drifted away from me and I was suspended there at some quiet center of myself.
During this state a garbage truck pulled up outside and performed its regular functions, dragging me back from simple serenity by a few gear notches.  I never quite fully recovered from that moment until the end of our session, but at least I briefly got to that place. That unfamiliar zone where my normal concerns were not gnawing at me like meth-bred amphibious rodents, trained by the Team 6 Seal Squadron, specializing in my undoing.
My friend promised to work with me more.
He said that I need to get out of my head, that I am too wrapped up in what's going on in my thoughts.  I need to focus on my body and my spirit more.
He is, of course, quite right.
The lesson:  Never forget to take time out to smell the lavender...
.
Posted by Sean Q6 at 11:10 AM