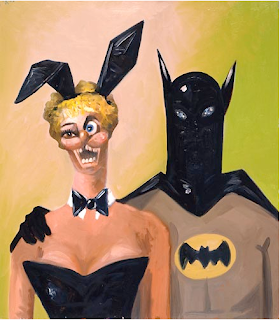 (My favorite Facebook profile pic)
I have tried not to dwell on this Facebook thing too much. I have also tried not to be put in the position of defending Facebook. But I have a friend, who has other friends, that have made it a hobby of theirs to denounce Facebook.  For me, it's like the guy who attacked the nutritional value of McDonald's food, "Super Size Me."  It wasn't really necessary, was it?  Nobody ever thought that McDonald's was actually health food. But he went ahead and made a movie about it as if some imaginary group of people needed to be refuted.

It is their similar imaginary duty to denounce anybody who uses Facebook.

So, my friend (not a Facebook "friend", but an actual friend, from real life) is a college professor.  He is a very bright guy and I respect many of his opinions on various subjects.  We've been friends for a long time though and, as is natural, over the years I have become increasingly suspicious of some of his opinions, if not many.  He served as a mentor of sorts for several years and as part of that relationship the student is expected to challenge the mentor from time to time. We have done that between our blogs as well as in email, on the phone, and in person.  It is mostly a friendly sort of thing. But the vitality of our respective abilities to think and articulate ideas is vaguely at stake. So sometimes we take it quite seriously.  Though we are equally clement in our resolutions.
In our discourse he somewhat playfully said that it's not so much that he doesn't like Facebook it's just embarrassing that he has a friend that does.  Again, I won't defend Facebook.  I wouldn't.  I don't "like" it the way that he claims. I find it to be silly and a vast reservoir of semi-illiterate democratic thought. But he and his colleagues, many of  them likewise bright college professors, feel the need to let it be known that Facebook represents an insipid cultural evil.  In their mildly misanthropic approach to the subject they must assume the position of cultural critic. That is what the expectation of them is and they trot out their anti-it dogma with predictable regularity.
A quick aside:
Many of you might not remember who Tipper Gore was.  I mean, before she became famous for being the wife of Al Gore when he was the Vice President of the United States and subsequently the recipient of The Nobel Peace Prize.  Back in the 80's she started an action group, I guess that's what you'd call it, that had the intention of labeling music with warnings for parents to let them know when there was dangerous content or offensive language in music, targeting heavy metal and rap mostly.  So she went screeching her Christian credo across the airwaves of the nation drumming up support for her censorship cause.
See, when you obscure the album artwork of an artist with a warning label you are blocking part of the message of the artist with a form of censorship. That's precisely what she accomplished. It is a notch in her belt and one that she is apparently quite proud of.  But it was this crazed fear of hers, and others like her, that the world was quickly heading into the lake of fire and she'd be damned if she was going to stand by and do nothing about it.  There were bongs and dildos penetrating our youth culture through music. Christ's love alone would vanquish these double-sided threats to our children.
These college professors who insist on denouncing Facebook remind me of her a little bit.  Not that they want to censor Facebook, as far as I know, but more in their absurd hysteria of response.  These are the same people who attacked video games upon their emergence, and will likewise attack every other thing that young people regularly enjoy that they do not. I don't play video games and I have little interest in the minds of those who do.  But I leave it at that, pretty much.
I have heard the variety of attacks to Facebook: Why don't these people just go outside their houses?  But why don't they just read a book instead? But most of these people can't even write! It's just so insipid how you're only given the option to "Like" things...
In short: people do leave their houses, some of them do read books, most people learn to write through practice, and if you dislike something on Facebook you are not prevented from using language to express that sentiment.
The English language is dynamic and can be used both conversely and accordingly, simultaneously. This is evidenced daily on Facebook by many of my brighter "friends" there.  These college professors seem to have forgotten the range of language, and its many uses. These are people that read books about how "texting" is the biggest threat to Shakespeare that has emerged since George Bernard Shaw.  It leaves me with the feeling that their particular brand of "wit" is not valued and revered as immediately as they might hope in an environment like Facebook, so they sulk.... surly cerebrals they.....
It's as if their lengthy unstated demands have not been met yet and this is cause for the communal celebration of the black mass.
Make no mistake about it... these are people that are accustomed to being heard. It is their job to do so, with authority. When they are in an environment where it is they themselves that must generate the differentiating conversational factors then they start screaming, "Burn the Witches!"

But they're never content to leave it alone there.  Ever.  They give Facebook far more credit than it deserves and then demonize that imaginary power that they've invented. The monster makers. The Tipper Gores.
Well, that's a mild exaggeration. But many of them define themselves through negation. It is the process by which they make themselves known; through their dislikes and various disapproval. As there is no "Dislike" button in Facebook they are left with no alternative but to whine from a distance. They would criticize a "Dislike" button as well, of course. But it is what they seemingly long for. A way to define themselves through negation that doesn't require the intellectual effort of using the English language. It must strike them as unfair that people can "Like" something with so little effort, and they are not able to "Dislike" as an alternative balancing force to the universe.  They have forgotten that this is the way the world works. Nobody ever needs to explain to anybody why they might like The Captain and Tennille. The burden falls on the shoulders of those who would  explain the "unworthiness of preference" that such a thing might embody.
This burden sometimes requires inventive language.  Facebook encourages a brevity in language but not necessarily a brevity in thought.  Yes, it is sometimes difficult to spark an interesting conversation there, just as it is in real life.  Again, the burden falls on the individual.  But likewise the most unexpected dialogues occasionally occur, born of bright thought and subtle humor.
Some people's wit on Facebook has made me re-evaluate them entirely and I have grown to like their friendship.... (No " " needed there).
Mostly Facebook is boring, I'll agree. But there are times when it is funny and I find things there that make me giggle, harmlessly.
Another of their "big" criticisms of Facebook seems to revolve around its similarities to a "high-school reunion."

Just so that they'll know for future reference: you needn't accept any invitation you have no interest in. So in that way it is "just like a high-school reunion."  What bothers them most is that people from their past still maintain some sort of interest in keeping in touch with them, and this creates a ripple in the universe so that they will be trapped in an unhappy imaginary high-school dance from here until the end of eternity just by jumping onboard that "friend" ship....
They imagine Facebook to be an exclusive component of the past because past relationships are recognized there.  Any reader who has made it this far can see the fault of this thinking without need for further explanation.
I'm running out of precious time that I could be spending on social networking sites....
Back to my friend, the professor.  His responses to me center around an imaginary world that I live in on Facebook where all is good, and all people are my friends, and I am loved universally and equally, at the center of an outpouring of eternal online affection, etc., etc.
In this illusory land I am drugged by the "Like" of others.
It is his friendly critiques alone that might save me from this world of insipid haze.
I mean, he's my "friend" he must be right, right?
.
Posted by Sean Q6 at 7:49 AM