Don't Even Think Of Barking Here 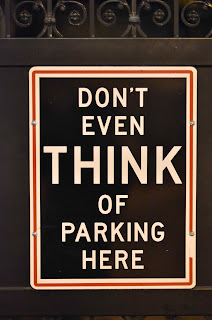 (issued by the nypd, thought division)

There is much to listen to already with the death of bin Laden.  Much of it is just amplified nonsense.  There are those who argue that torture was clearly justified and that it was this unquestionable practice that led to his assassination.  There are others that rightly point out that there is no way of knowing that legal means of intelligence gathering might have been equal or even more effective, as it might have persuaded others to aid us even more in his legal capture.  Both claims are unverifiable. We will simply never know.  We can not logically conclude the present from a non-existent past. Alternately, assuming the complete condition of the present from singular instances in the past is a logical assumption that also can not be made. Though this second form of reasoning is much more easily sold to the willing. Doubly so in fact, it is done without their reflection in mind and relies on this lack of consideration for the transaction to be complete.

We do know that we have all entered a new world where the due process of law plays much less of a role.  Concepts of justice have changed from era to era and there has never been a universally agreed upon meaning of, or strict definition for, the concept of justice.  We are taught to believe in the importance of the process above almost all else but then we see it perverted under circumstances when our leaders deem it justified, without apology or correction.  In my lifetime it has been much more rare that the process publicly corrects itself rather than instances in which it is perverted; publicly, privately or otherwise. It seems to drift further and further off course in some of the most fundamental ways.  One has to pay very careful attention to the decisions of the Supreme Court to ever get much of a sense of the legal system being self-correcting in any way whatsoever.  Even then the victories are scant and unnoticed by most, or somewhat obtuse to a layperson's understanding of constitutional law. Mine, I mean...

It has always been my belief that the police are given far too much power and they abuse it even farther beyond what is actually granted them. Justice seems rare in the instances of police misconduct.  That is only one way that I have noticed recognizable changes in the use of power and the loss of personal rights in my lifetime.

I was told that no one was allowed to search me or enter my home without a warrant when I was growing up. The former has never been true and the latter becomes less and less so with each new definition of "threat" devised by any law enforcement agency given even the vague responsibility to freshly define the term. I found out some time ago that the U.S. Border Patrol can perform legal and warrantless searches on anybody within 100 miles of a border, including American citizens.

Approximately 2/3rds of all Americans live in that area.  I have never once lived outside of that area in my life.

So, a massive Fourth Amendment protection has never even applied to me. This special branch of the Department of Homeland Security has more sworn and armed officers than any other branch of the U.S. Government.  This has all happened in the last 10 years, mind you. It is a reasonably small step to deputize state and then local police officers into this agency so that they assume the same powers granted therein.

Many people reading this might say that I am being paranoid in the same way that I have accused others of being in the past, and on this very site.  But remember that roadside car searches were birthed tangentially from the government changing the laws governing the rights of airline passengers. Those traveling openly in public became routinely searched. They were no longer secure in "their persons." These searches were non-judicially sanctioned and without probable cause, they were instead merely a ubiquitous shift in policy and procedure for travelers.

To even leave the search area of an airport now, un-searched, constitutes a special new crime. To enter the area is to forego constitutional rights and establishes a silent unknown-to-most admission of complicity in this act of constitutional relinquishing.  At an airport security check it is no longer legal to say to yourself or others, No thank-you, I prefer to keep my privacy and dignity intact. I will find another means of travel, and then leave. They can, and just might, arrest you for simply denying a bodily search and trying to leave.

So, back to our cars... Eventually they maintained that a car is not a personal space either and people should expect a reduced sense of privacy there as it is not generally a storehouse of personal belongings.  You see, when you are in a car it is best to imagine a police or customs officer there in the car with you, a legal co-pilot if you will, guiding you into a safer future. Anybody who appears threatened to this idea is perhaps a danger to the very same society we are all committed to protect and defend.  These people who question authority are like bombs waiting to explode, you see.  They could have already infiltrated your stereo, your glovebox, even your trunk... they function in a cellular way, you see.

Probable Cause only means that you've probably got something to hide.  'Cause why else would you be nervous...

This is all true... trust me.   This was the very reasoning that allowed for car searches.  I have never met anybody that did not feel that their car was not a personal space, nor ever befriended someone that did not use it extensively as a reservoir for personal belongings, some much more so than others.

I've known people that have even lived in cars for a time...

Now if that isn't a reason to ball up the whole damned Constitution and throw it out the window onto the interstate highway then what in the hell is?  If an honest taxpayer can't expect some prison-tramp to clean up roadside trash then where does all that money go?

It becomes easier and easier for a government, whether local or federal, to justify the misuse of power simply by doing so.  Over time nobody remembers, or is willing to fight for, what was initially created and put there to protect them.  It is only a matter of time before the ones who want to fight for their guaranteed rights seem as if they have something to hide. I mean, who would resist safety at a time like this, right?  There are vast highways out there to be cleaned of un-recycled paper.

"We reserve the right to search all bags" is a funny sign that I see posted almost everywhere I go in New York. It is near the doorways of many shops and bodegas.  They have no such right, of course, but most people that I ask about it either don't know this or they question my plain objection to it.   I want to make a t-shirt and wear it and sell it around all of New York that looks like a normal blue and yellow NYPD shirt, bought by tourists everywhere on the streets, that simply says:  "NYPD We reserve the right to search all homes and houses"

One day we will all be millionaires running for our lives.

When Obama won the presidency I was in a roomful of people who were quite cheered by the victory, as was I.  But as part of the revelry I pointed out that Obama would do nothing to restore the balance of powers that George Bush dangerously offset while in office. My future wife was in that room and no one attacked my statement, or me, with more poison and hostility.  It was a difficult time for me because I knew that I was right. Both about my estranged love for her and my opinion that a person in power does not relinquish that power easily, especially when they are not perceived to be the one that wrongfully assumed it.  It is an unfortunate downside of successive presidencies.  Why correct the mistakes of the past in that way? That would be truly poor politics; to give away power. The goal is to assume even more power but make it appear as if that is a necessary part of correcting the abuses of the past.

Because the danger's not really back there in the past, it's been out in front of us all along, out there in the future,  and it's out there now even more than ever.... 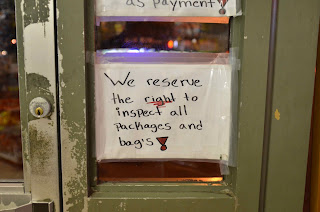 (the best possible grammar for the cause)