They are remembered to me as the glory days 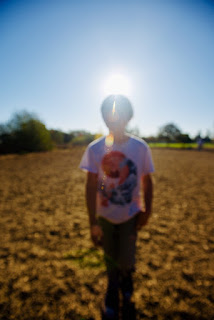 I love the accidental solar flare; it takes very little to please me - accidents, sun, flares. You get the idea. It almost matches his shirt and the out-of-focus shot seems to add to it. It reminded me of some contemporary art I saw once, an exhibit, in Mexico City, back when traveling other places meant that I would try to get the most out of the experience. Before each trip to the airport at the end of ~two days at an afterparty became an exercise in drinking to sober up.

Well, I had hoped to just write a quick post wishing anyone and everyone a Happy Thanksgiving. It is a sacred American tradition with a horrible history, we are told by those whose job it is to make sure we understand that we are all born into sin. Never before in my lifetime have liberals resembled the evangelicals, in whom they are so disappointed in their support for Trump, but possess the same ideological bent, and belief in demonic possession. Those possessed are easy to identify: they are for the eternal enemy. They seek an even more extreme leader, and if history tells us anything they won't stop until the find one better than the unlucky one that they do find next.

There is never any crisis of righteousness. Not with so many being reborn into sin, ad infinitum.

Well, I had hoped to just write a quick post wishing anyone and everyone a Happy Thanksgiving. It is a sacred American tradition.