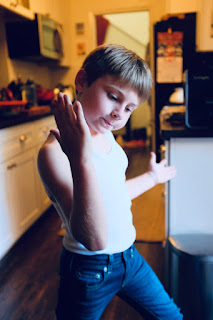 A friend challenged me on yesterday's open advocacy for corporal punishment. I almost had to slap the fucker, except that we were conversing through text. The slap will have to wait. Of course it makes sense to hit kids when they act up. I know that we're supposed to reward them for their creativity, especially in bad behavior and poor manners, but what the fuck. Social mores on child-raising are about controlling parental behavior and virtue signaling from the speaker much more than they are about producing super-children. It's why my most common response to people lately has been, Please, get the fuck away from me.

But I was mostly kidding about hitting kids. You should only hit a child if they hit you first. That rule goes for everybody. You can hear the nervousness in mom's voice when I tell the boy that he always has the right to defend himself. You can hear her wanting the power of approval in these moments, trying to add qualifiers and create scenarios where this basic axiom wouldn't be true. I state simply, Nope, anytime somebody attacks you then you have the right to defend yourself and don't ever let anybody try to tell you otherwise.

If she pushes back against that I tell her that she's making herself unelectable.

I'm just fucking around, of course. You should always strike first. Everybody that has ever won a fight knows this. We're moving back towards a society where people punch first and assess the merits or questions of the attack later, as well as the criminality. I miss the adrenaline rush of fights. I miss almost everything about youth, the apparent ease in which one can make mistakes most of all. Everything was easier when I was younger, especially getting old.

Rage, rage against the dying of the fight.