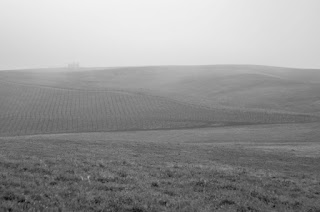 I couldn't find a new picture, so I started at the bottom of an old folder and gave up looking at this one. It suits my Saturday morning mood. Autumn. Or Fall, for those who lack my pretenses. I prefer the original Etruscan.

Today will be dedicated to Dad Stuff. Cub Scouts errands and good deeds, followed by a parental talk. My son made fun of a special needs girl yesterday at school. The girl did not hear the slur, thankfully, but other kids did. It was presumably for their benefit that he made his joke. I had to try to explain to him why singling someone out for a thing that they have no control over is very wrong and the cruel act of a weak and scared human being, but I couldn't quite find my footing in the brief conversation we had about it yesterday. I mean, I hit all of the important points but somehow I don't think that I drove those points home as well as I would have liked to. So, he has a dreadful and uninvited conversation coming his way today. I'll only stop when he's crying. That's how I'll know that I'm an effective communicator and a good dad.

Also, I'll point out to this little bigot that racist jokes are all the rage now. He's living outside of his times. If he really wants to be cool then learn irony and focus on the woke.

It is a deeply unpleasant thing that he has done.

The other day, he and I were at the dog park. Well, we were leaving the dog park and he wanted to play at the playground near the parking lot. So, we did. At some point I noticed that he had dooky on his shoe. Jokingly, I said, Oooooh, it's dooky.... He became very sullen and clearly uncomfortable. I stopped right away and pointed out that he and I make dooky jokes all the time, and that because he had some on his shoe doesn't mean anything, and that we'd clean it off when we got home. But he made the association between what was on his shoe and himself as a person and it hurt him, such a joke coming from me. I could see it clearly in his reaction. I'm going to find a way of using that episode to help him understand how it feels to be singled out for something that's not your fault.

I hope he doesn't equate being born with a visibly noticeable learning impairment with having shit on his shoe. My impending speech perhaps needs a little more work. Consider this the rough draft.

I'll think of something.

I have tried pointing out to him that in all beauty there is some strangeness of proportion, also, but I'm not sure how much he can yet understand such a concept. He likes toys that are sleek and cool and secretive and slick. Maybe I can use Batman to help him understand the inner pain and disfigurement that many people live with, and that some embrace fully to understand who they are. If that doesn't work then maybe I'll beat the little shit into tears. Put some fear in him, at least. People say it's wrong, but in the moment it seems like the right thing to do. If not, then nobody would ever do it. Right? Truth is transitory, especially with that of sudden violence. It's true meaning and beauty seems to disappear as soon as the cops arrive.

I'm not really going to beat the boy. I've never touched him punitively in anger. But I can still feel the rightness of the impulse. I'm not one of those liberals that can only see the failings and injustice of others. My search for the iniquitous starts right in my own heart, and rarely needs to leave. If I had more moral courage then I would admit that more often. Knowing that I would have been impeached about two years before Trump, if I had ever become president, helps. I only have any sense of nobility when it comes to ideals and abstractions, and only in conversation, rarely in deed. When it comes to drugs, money, power, and pussy I resemble Caligula much more than Captain Crunch.

Maybe I can hire somebody to talk to the boy.