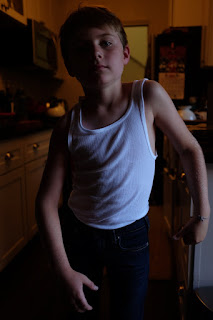 CS texted me last night, stating that we should be taking and posting more dangerous photos. I agree with him, but I am an enormous pejorative pussy. In my world there are only two types of dangerous images: bad ones and worse ones. Translated: other women and other, younger women.

Best to stick with portraits that grandma will like and approve of, because only god knows how much we crave her unrequested approval.

I do love photos that contain some hard to describe sense of menace. Images snatched from the continuum of life that reveal or suggest some lurking danger, even if the subject doing the lurking is the one taking the picture, or the one viewing it. Danger need not be real to feel real.

Russell Chatham died. Rachel's mom has a large print of his in her house that I love. It is absurd and takes up an entire wall. I could look at it for hours, and have. If you look up his California paintings - from his artlessly titled book Russell Chatham: One Hundred Paintings - you'll see many that were made close to where we now live. One in particular - Sonoma Mountain - is a place where I regularly ride my bike. I recognize the spot that is the subject of the painting, it's almost impossible not to. I will ride there this morning with a friend, coincidentally. The trail starts near Jack London's house and runs up the ridge about 2200 feet to one of the meadows near the top. It is the bald mountain top that is the subject of his painting. But there are many others from Napa and Tomales Bay and Marin. It is a great place to live for natural beauty. I'm hoping that will prove to be enough.

In an effort to convince myself that I should buy the new Fuji X-Pro3 camera I decided to start shooting my X-Pro2 without the use of the back view screen. I will try using only the optical viewfinder for a bit, meaning I have to bring the camera up to my eye to effectively frame an image, like shooting with film, or more like it. So far it is driving me mad. I've realized how much my shooting with that camera is not the style of shooting that it was meant for, but it is a way of shooting that I've learned to love and don't really use with any other camera. I often shoot from low angles, but do so just by using a wide angle lens - 24mm - and leave my arm hanging at or just a bit away from my side, or swinging as I take several. But the back screen can still be used to achieve approximate composition. I shoot a lot and hope for the best. Every now and then lightning gets trapped in its act.

Now, here is the fucked up part. Even though I spent one night shooting in a way that I recognized was a bit limiting for me, as I was lying in bed thinking of mostly sleep, I convinced myself that I could just buy the new camera and keep the old one also. This, so that I could choose which one I wanted to shoot with based on mood. Keep in mind that I am not a professional and have never once made any money off of my photography. The closest I ever came was when a reader here asked for a print of one of my photos and paid for the print and shipping cost. So, one time I broke even on one part of dealing with one image. Every purchase is money that becomes lost in a hobby that has no logical limit in terms of things you can buy, if you only want that thing. The only requirement of desire is always pre-satisfied. It justifies itself because it exists in advance of any need for justification.


But... I just got an enormous stock payout from my company, so what the fuck. The insurance people also paid every single cent for me getting hit by the car. They never even asked me to pay a deductible. The hospital must have felt that the $50,000 they charged my insurance company for letting me walk out after three hours, telling me to take aspirin if you feel sore, was sufficient payment. I took out $200,000 insurance for accidental death or dismemberment yesterday. It only cost me a dollar every two weeks. It's like a lottery ticket that always has the same numbers. I want my possible final last thought to be, Well, that'll be something nice to help ease the pain for Rachel and Rhys. After taxes that should be almost $100,000.


The world is so fucked. I want in on the corruption. Do I have to start at the bottom, again, as if it's an entirely new career? I have some fledgling corruption experience on my shadow resume. Shouldn't my lifelong efforts at avoiding actual work count for something?

Russia, if you're listening, maybe you can find some dirt on my opponents, too?