The Son and Mood 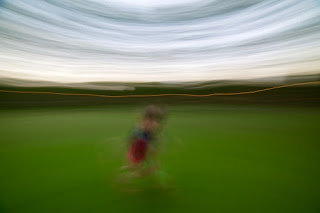 The boy and I were playing in the backyard with a camera. I wanted to do a long exposure of the twilight sky and hoped to maybe catch the glimmer of a planet but couldn't find my tripod quickly, so a long exposure of the boy running circles around me instead. I love shots like this, also. If I put more energy into it I could probably bring out more of him. That wavering orange line is the sun.

He took a similarly arranged shot of me with the gorilla-ghost of the idea stalking around in it.

I have few memories of childhood left. I return to them too infrequently. They have become a blurry circle. I tried to tell the boy a little bit about it on one of our bike rides the other day. It might have come out wrong. I told him that he can't really know which parts of his life now he'll remember later, but not to worry about it, that real things become memories which then just become stories that you repeat, and each time you change them a little bit until you just can't be sure about them any more. And that's also how you can feel yourself growing up. 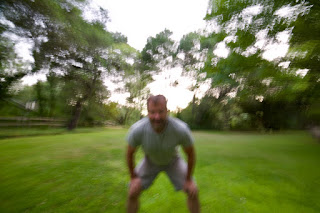