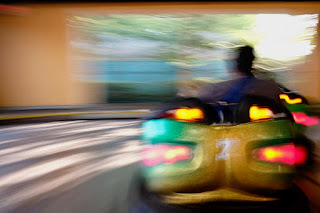 As promised, we went to Six Flags - myself, Rhys, and a father/son pair of friends. We were there when the park opened and stayed until closing. I'd like to say we got our money's worth but they just bilk you further the later you stay. $14 for beer, etc. A couple midday beers are a vital part of taking two 7-8 year old kids. Few things relax the mind and reset the day as do afternoon beers. I was eating cannabis candy edibles like it was Halloween, also. All day.

Don't let my tone fool you. It was fun, exhausting.

We rode everything, even a few roller coasters. The boy braved through it, though there were a couple sensitive episodes where we risked a meltdown. I had to put on my reassuring father voice and let him know that we didn't have to ride anything that he didn't want to, but that he was totally fine and I wasn't going to let anything happen to him. As if I had any control over such a thing.

The kids seemed to like the bumper cars the most, a ride that we returned to several times throughout the day. Just like with real driving they became much more fun after a few beers. I guess I like that sense that anything might happen.

We arrived home late, well after bedtime. The boy almost sleeping but wanting desperately to tell mom all about it. He showed her the shark's tooth necklace I bought for him and explained that it was both real and very rare.

It seems that half of a child's magic is being full of shit without revealing any hint that they know it. Faith is charm when it's harmless. 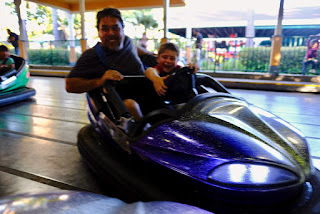