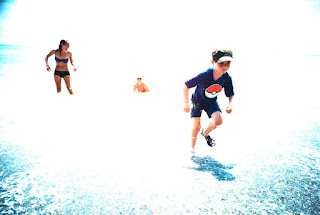 I want to be doxxed. To find out what it feels like to be suddenly hated and hunted by strangers who have intuited my intentions through a hearsay posting. I figure that it should be pretty easy to do. I'm going to Six Flags today with the boy and one of his friends. There should be plenty of young kids there. I'll just take pictures of them, especially the little girls in dresses, with a - gasp! - film camera. If anybody says anything I'll scream, "You don't know me! I'm barely even attracted to young girls!" then proceed to take pictures of good looking little boys.

It's best to bring a really, long, thick, black lens for this type of photography. Doesn't matter if it's a telephoto or wide angle, it is meant to only be suggestive and intrusive. Let the lens linger on a subject when composing a shot, but takes lots and lots of them. Hide behind things. Try to sweat as much as possible, a'la Peter Lorre in M. If they ask what I think I'm doing I'll explain that I am currently a "disgraced financier." This is language they'll understand. Anything they scream at me I'll follow up with, "Allegedly!"

Perhaps uninvited beach photography is where I'll one day excel. I want to show how vulnerable children are when they're barely clothed and have wandered from their parent's beach towel and umbrella. I think the camera can really reveal those subtle weaknesses. It's practically a public service that I'm offering. If you capture kids in the surf sometimes a wave will reveal a little unformed titty. Can I call a child's as yet undeveloped breast a titty? I'm just not sure what language I should be using here.

Ok, I don't actually have anything to relay this morning. I'm just riffing off of CS's post. If the many ideas of the past are what has now become so problematic then shouldn't aging be illegal?

The more people run to the police to report someone suspiciously taking pictures in public the more the police will illegally harass photographers. We know this. They already try to tell people that they're not allowed to video them in public.

Everybody knows that pedophiles walk around in public places pointing expensive cameras at children. They do this so you'll know what they're truly after - the blood of the innocent. Those sickos are so emboldened now. They don't even try to hide their pedophilia in their van any more. They're out there wandering around with their military-style surveillance devices. Owning and using a camera that can't make phone calls will soon be a tacit public admission that you crave child-rape and will stop at nothing to get it.

The boy wanted to make sure that he was tall enough to go on all the rides, so I went online to look and found these regulations: 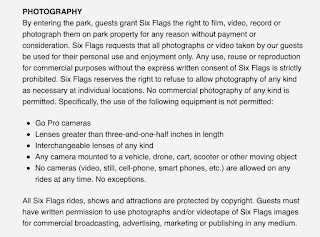 The world will be fine, as long as none of us use interchangeable lenses.

They'll stop at nothing.