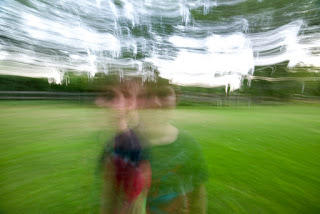 I just spoke for an hour straight, in what was mostly a single run-on sentence, or what felt like it, with only a few breaks to gulp water. I report that here out of duty, not pride. I was tasked with training somebody on smtp relay forensics and I neglected to make notes or create an outline, I just chatted off the top of my head like an educated crackhead. Maybe next time a plan is what is most needed.

Oh, have I not mentioned here before what it is that I am so good at, and why I get paid so much...?

Ah well, best not to brag. It is my humility that most people praise.

More long exposures from the backyard with the boy. They are fun, to play with time and the continuity of vision. I'm going to start telling people that I am a quantum photographer, specializing in Schrödinger's Portraits. I found my tripod, so maybe the boy and I will take some pictures of the stars soon. I hope.

Not to whine too much here, but my father rarely did anything with me. I have few memories doing recreational stuff with him. Though I have no memories of me trying and being rejected, either. There was just a flatness to our relationship that seemed to stretch both directions.

I remember my mother once guilted him into throwing a baseball with me. I was doubly ashamed of him because he caved to her and he was bad at it. She fucked up my opinion of him more than she should have perhaps - my mother, Stella - but there was some truth in her nearly perpetual barbs towards or about him. It wasn't until I was an adult and I started to ignore him, after my mother died, that he showed much of an interest in having a relationship with me. Other than the years of being an authoritarian who might one day guide me to happiness by warning me of all the bad things that would happen to me if I kept on my current course.

To his credit, he did express regret later in life for not having more of a relationship with me. If I've mentioned any of this here, which I have, then I hope I mentioned that also.

Well, onwards and upwards. My son might remember me the very same way.