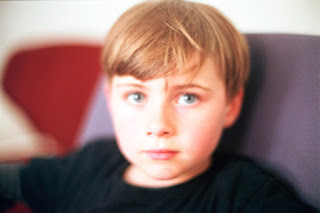 I should have been using that soft focus lens with film more often. I like the look.

My work day is over, the dogs are lying here on the bed with me, soon I will go to pick up the boy. Then, there will be the evening being a dad. Maybe I'll convince the kid that we need more candid portrait shots of him.

I have light stands and flashes and wireless syncs, but nowhere to use any of it. It would be nice, if we were to move again, to find somewhere that offers 8 bedroom houses for what we pay now. California has already slid into the ocean in so many ways.

Maybe I'll take the boy to get some super Napa sushi. Strips of raw fish laid out in rows of three or four. Sounds so nice - cold sake and beer, because having just one with sashimi tastes and feels lopsided. If we lived just a little bit further out in the country I'd let the boy drive home. Just about a mile from here is where the real farms start, and few there care, and about less and less, least of all do the cops notice or act. Like stepping into the previous century. Though, I've never heard any Mexican-Americans speak of the region quite this way.

It would be fun to let him drive. To have the seat close enough so that he could press the gas, but not too much. It would be helpful if his brake leg was longer than his gas leg, but who wishes such a thing on a child for this specific purpose?