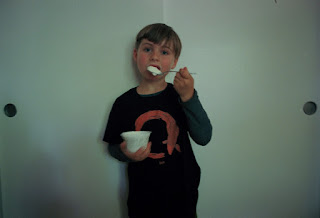 So, now I've scanned a bunch of film frames. Soon I'll need to get in an editing mood, and it will need to last. They all require some cleaning up, some more than just a bit.

I'm doing everything wrong, still. I confirmed this when talking to CS the other day. He was telling me how to best scan the film and then manipulate it later in Lightroom, or something. If I could, I'd take a photography class. I have to hear something three or four times now before it sinks in, or gets past the defense of my deafness. It is rare that I ever modify a snapshot and in any way improve it. When I compare my edits to the original I rarely keep the changes, but it helps me see more. Just shoot like an addict and rely on a percentage of interesting mistakes stretched across a lifetime.

That's what's always worked for me.

I'm lying around listening to a Blood Orange album, not his latest. He's the type artist that perpetually has a newer, cooler album being released. How else does an artist maintain that chic of newness, the sheen of visiting from a future years distant. You know you've finally made it when you look around and all of your acquaintances are dressed as if just now arriving from the coming times.