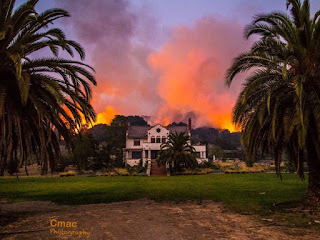 This is all becoming stressful as fuck. Being displaced and never quite knowing what is going on, and when we'll be able to go home, and whether home will still be there, is all taking its toll. It keeps seeming as if the fires are receding away from our house, then the winds will shift and we are re-threatened again. A large fire has come down from the hills above Sonoma from the north now. It si very threatening, and very close. I can only hope that the firefighters are able to keep it from consuming the vast majority of the houses down on the valley floor.

This morning I went to get some coffee. I was listening to a sad old Hank Williams song, one that just happened to be playing, and I started crying. I had to pull myself together a bit before going in to Starbucks, otherwise they would all know what an enormous pansy I am.

Is that toxic masculinity? That's what I am I guess, or rather what I represent - poison maleness. I don't seem to know how to talk about my feelings, overly self-reliant, when I play chess I prefer winning to losing, I like pussy, etc. This morning was the only time that I have ever cried and when I did I made sure to publicly remind myself that I'm a little bitch.

I should be careful, admitting that you like sex is tantamount to the crime of ravishment now, or soon will be. Only transgender sex should be celebrated. I've been telling everyone that will listen that my scrotum is actually only a protective sac for somebody else's ovaries. I refuse to touch them because one of my hands is still male and I'm not entirely sure that they are developed enough to provide consent. They don't have mouths and it would be very wrong to speak for them. I've given myself a Brazilian from my navel all the way to the clitoral hood of my anus.

When having sex I insist on being on the bottom and laying face down with Rachel standing over me with one foot on my back like Captain Morgan, an eye patch on to protect her from the shame of my maleness. Anything more from me could constitute a form of assault. All the women I know are exclusively attracted to purely submissive men. No man should ever occupy a dominant position during the act of coitus, not for the first ten years or so, anyway. Everyone should make love like Hillary Clinton - fully clothed in the finest polyester. I always make sure to chastise myself for getting an erection. I'll read the thing passages from Simone de Beauvoir until it withers. I only let women see me naked in very, very cold water. The entire act of intercourse involves me begging for forgiveness for my clitoris being larger than theirs, which is sometimes true.

Do you see what this fire has done to me? It has turned sex evil in my mind. I have been having impure, degenerate thoughts, where nothing but purity and beauty once freely roamed.

I don't have an anus, ignore that sentence. I had it removed because I didn't want any woman I loved to ever feel that it was competing with their vagina.

Jesus, what is wrong with me?

Why can't I laugh at the right things.

It is impossible to get good, reliable information. Everybody is doing their best but the area has been evacuated and those fighting the fires are not spending much time documenting their updated efforts on Facebook. So, I have been doing my best to add to the misinformation. Yesterday, I posted an image of what was claimed to be part of the fire rescue efforts: 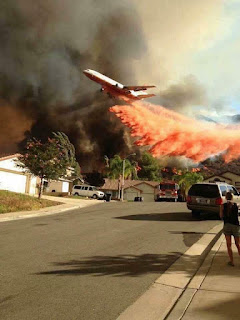 It turns out that it was not real. Or rather, it is real but not from "our" fire. 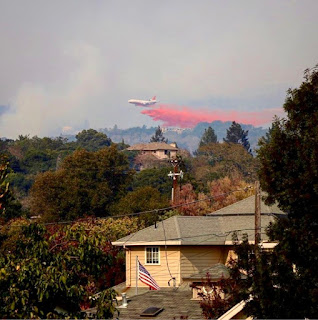 That was taken from the park near our house, yesterday or the day before. Not quite as dramatic as the one above it, but I suppose it might have been from a closer proximity.

To think, a week ago my biggest dilemma was deciding whether or not to buy a new lens.

The fire keeps moving in towards us. Here is the latest, the arrow pointing to our street: 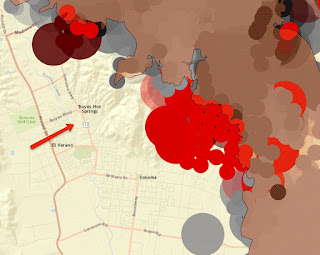 All of this must be boring for those elsewhere. It is tiring for us also, though we have less choice to look away. The mind wishes to peer through the smoke, to see into the heart of the flames, to treat with a keen but tiring alertness the raging mortal darkness. The heart can hardly fathom the vast sea of cinders that remain.

We will return, if all goes well soon, to a partial rather than complete wasteland.

What are the roots that clutch, what branches grow
Out of this stony rubbish? Son of man,
You cannot say, or guess, for you know only
A heap of broken images, where the sun beats,
And the dead tree gives no shelter, the cricket no relief,
And the dry stone no sound of water. Only
There is shadow under this red rock,
(Come in under the shadow of this red rock),
And I will show you something different from either
Your shadow at morning striding behind you
Or your shadow at evening rising to meet you;
I will show you fear in a handful of dust.

- T.S. Eliot, exceprt from The Wasteland