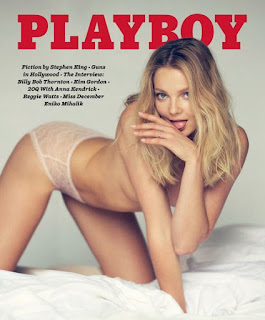 I wasn't defending Hugh Hefner, though maybe I should. I didn't read the article carefully yesterday. I hated the tone of the piece, and of the author, instinctually and immediately and until the end. Some feel Hefner is worthy of attack, being both a benefit and detriment to feminism. Torch and pitchfork can be taken up equally or optionally by anyone who cares. Few women I know seem to wish to. Though, I've hardly befriended the type of woman-object that would shy from the curiosities or content. That might just be the purity of coincidence.

But man... white male liberal becoming very mad about thing it can sink it teeth into - man like me.

The smart have lost their collective mind; they say that kneeling is the first to go. The messaging is restrictive, attuned to minor-correction, the macros in waiting, bound by newly assumptive jurisdictions, and yet so contradictory to the claim of liberalism anybody can predict now what will soon happen in 2020: Trump will triumph. They are going to hand the country over in perpetuity to a juggernaut of blunder, or whomever he passes the torch of anti-intelligence over to. Go blue - expect red. The clever set are out there somewhere, still searching for the clitoris of Eva Braun.

Why not, though, really? The past is the easiest of moving targets. It appeals to any dolt and many dotards. Confuse the comedic hindsight of Mad Men with personal activism, and why not? Satire is dissolved in affection for the past, we miss its message, its playfulness with time. Judgement then comes easy, its stars so often aligned to appease.

Pretend to possess the morality of the future, attack the past you never or hardly participated in, express advanced attitudes, then you, you, you....  lone space guardian inviting arrival.  Walk away this hero, swoon in insouciant self-admiration, such non-contemporaneity, such thisness.

Those who uniformly denounce religion, but then take up that same struggle and its authoritative posture - best at doubting the intelligence of others, always big believers in democracy.

What can be done, if you listen they will speak, only louder.